Alasdair Stuart on Dreams Before the Start of Time

Brian Aldiss’ original definition of cosy catastrophe is this:

“The essence of cosy catastrophe, is that the hero should have a pretty good time (a girl, free suites at the Savoy, automobiles for the taking) while everyone else is dying off.” 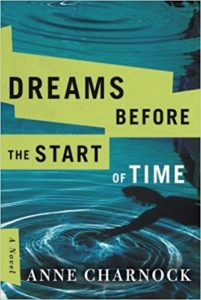 That’s both grumpy and a little unfair, although not that unfair. Wyndham’s best work, The Chrysalids and The Kraken Wakes in particular, colour outside those lines a fair bit, but the heart of his work does tend to sit in nice country villages which the world ends around with tea still being readily available. I’ve thought about that sub-genre an awful lot, because Wyndham’s work was one of my entry points to the genre and I’m both fond of it and painfully aware of it’s flaws. I suspect Anne Charnock is too, as Dreams Before The Start of Time subverts and reprograms the cosy catastrophe, in a variety of ways.

Charnock’s novel tracks the changes in familial groups across three generations of two families, starting with two women whose approaches to pregnancy are very different and ending decades later in a future that has been quietly upended in an ongoing wave of relatively cosy but still seismic change. It’s a saga and one with a default female gaze. In genre fiction spaces, any perspective that isn’t a cis-het white man is still too often the exception to the rule and the saga also tends towards the patriarchal approach. The fact Charnock does not is to be absolutely applauded and the book’s best sections work precisely because of this refusal to not do what the majority of novels in this field still do. It also leads to the problems that other Shadow Clarke jury members have talked about, which we’ll get to shortly.

That subversion carries across to every thematic level of the novel. Charnock’s story is, fundamentally, the sort of thing that literary fiction embraces with open arms. Two women at the head of two very different families trying to help their children and grandchildren survive as best they can while also continuing their own journeys into the future. This is the stuff Radio 4 drama is made of, and the concerns at the heart of the novel vary from fiercely middle class to fiercely aspirational working class. The fact that one character was imprisoned for an Attwoodian crime and is trying to build a new life for herself is a perfect example. This is a traditional, mainstream story with a dark genre twist and that’s a subversion of both expected norms that leads to surprising moments that are reassuringly familiar and starkly different. That’s also true of the later plot involving the struggles of a family with children born through different methods. From a literary point of view, this is Charnock at her absolute best, hopping between viewpoints and showing us how conflicts arise because of how similar people are regardless of their method of conception which is subversive in and of itself. But it’s also acutely observed, oddly sweet character drama and is one of the book’s absolute high points. The embodiment of both theme and subject; science fiction as the different child in the familiar home. The mixed family becomes the two genres trying to work out how to co-exist. That’s thematically courageous and far subtler than cosy catastrophes normally are.

It’s worth noting that this fictional structure is very similar to one Heinlein was fond of in his later years. I’m not presuming Charnock’s intentions here, but as someone who has had to suffer through more than one of science fiction’s oldest right wing uncle’s free love screeds, it felt intensely refreshing to see that format used by literally anyone else for literally anything else.

But this technique isn’t without its challenges. Land something like this right and you’ve pleasantly surprised two audiences. Land it wrong and you’ll alienate and annoy two audiences. Where Charnock lands, and how she did, depends on what angle you look at the novel from.

As was discussed in the round table review, what’s being talked about here is eugenics or at the very least eugenics adjacent. That’s a terrifying subject and one of the only parts of the novel where Charnock’s careful, polished prose and slightly ambiguous time frame and characters plays against it. On the one hand, this is a frog in a pan of slowly boiling water, the lack of societal reaction near identical to what you’d expect in the real world. On the other, this is an open target, a logical place for the novel to go, thematically chewy and interesting issues to discuss and, by and large, it doesn’t.

That’s reflected in the other concerns that were raised, about the sketched in world building in particular. For me that wasn’t an issue but that’s personal preference. I always connect better with SF that features incremental changes like this. The Singularity is undoubtedly coming, but I find it’s always more interesting as a road map than it is as a light switch.

The issue the novel can’t escape is its failure to engage with the LGBTQ Plus spectrum and reflect cultural changes and evolution in that frame work. It’s not just a logical place for the story to go but a mandatory one and for it to be couched in the terms it’s couched in does, as has been pointed out, date the novel in a manner that doesn’t seem intentional and alienates the exact audience a story like this would logically attract.

I wonder if that’s a function of the design rather than a flaw. My comment about this being a Radio 4 afternoon play in prose form stands, it thematically is note for note perfect with much of their output. When looked at in those terms, I wonder then if this is the sexuality and reproduction singularity viewed not from the present but from the mild past. The revolution and evolution of how we identify swept up in a slow rolling wave of change based around the exact sort of technology, and concerns, that Mail on Sunday readers would worry over on their way to Caffè Nero.

That sounds both pejorative and defensive I suspect and it’s not intended as either. Rather, I find it necessary to view the novel through this final lens of subversion and to give the author the chance to be read not as failing to engage within their field but rather working with the tools that fall just outside that field. Middle class concerns, middle class dreams, the apolitical bubble that moderately well-off white people sit in and all of it bobbing on a slowly rising tide of epochal change. Not a catastrophe, certainly not cosy, but wearing those clothes even as it quietly, inevitably changes the rules.