The Destructives by Matthew de Abaitua: a review by Megan AM 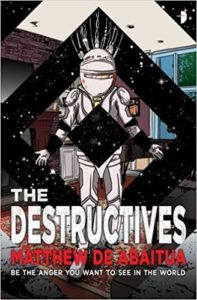 His instinct was to remember everything about individual humans. The inexactitude of these remembrances could be beautiful, in their own way; he sought to create a perfect living replica of the past, and in failing to do so, his project almost attained the status of art. His project, with its tiny imperfections, overwrote his memories of the past, warped events as they had once occurred. This was the paradox of remembering, how each act of recollection was also an act of destruction. It was frustrating, yes, but also wonderful. (ch. 26)

De Abaitua wrote one of the most complex and difficult novels from 2015, If Then, and I still find myself wondering about it at random times. I was so taken by that strange novel about an algorithmic society in decay—a novel that feels so uneven on the surface, yet so complete in substance—I couldn’t articulate my thoughts well enough to write a decent review. Since then, The Destructives has been on my “most anticipateds” list. Placed on a Clarke award shortlist only once before, for The Red Men in 2008, de Abaitua was unaccountably left off the list for If Then in 2016. The Destructives is the latest piece in this abstract thematic series and, given its scope, it seems primed to make up for last year’s Clarke snub.

But it’s going to require a constructive approach to be convincing, especially after Nina’s fine job of describing her cool feelings after its sudden, bland genre turn—that ultimate literary betrayal after those splendid fictional sensibilities swerve into stilted sci-fi action-adventure. Well, it’s not as if the title didn’t warn us. I realize that now.

Packaged like any other standard dudebro sci-fi action-adventure, The Destructives doesn’t exactly look like a novel that belongs on a prestigious award shortlist, and I’m sure anyone who knows me has wondered what I was thinking shortlisting something with the title paraphrase: Be the anger you want to see in the world. But I assure you: de Abaitua can write. His grasp of existential issues is sophisticated and sublime, his ability to swaddle those issues in SF concepts is original, and his precision with words is masterful. Anything he writes should be an obvious contender for such an award.

And yet, here I am wrestling with this difficult review, because The Destructives, as Nina has already pointed out, isn’t very satisfying, and not in the chewy, “what does it all mean?” sort of way, as it applied to If Then. The first couple of acts stay true to If Then style, setting the bar high for combined literary and SFnal sensibilities, but then dwindles into the cover promise of dudebro sci-fi action-adventure in the final two-thirds. The final parts rely on tiresome plotting, stock sci-fi elements, and immature gender politics, becoming the kind of SF that we’ve all seen before. And yet… something about it suggests a self-awareness behind its sudden turn to two-dimensional genre.

In the context of the shadow Clarke, The Destructives is an ideal specimen for the project because, in its weird way, it represents the push-and-pull tension between the sci- and the fi- of sci-fi, between the genre superfans and the so-called literati, even between the Clarke Award (of late) and this shadow jury. De Abaitua stitches together these supposedly incompatible sensibilities of science fiction, but instead of seamlessly weaving them together as he has done in the past, the incompatibility is reinforced as a clumsily stitched and patchy consequence of these tensions.

It goes through four phases. It begins during Theodore Drown’s university life, with flashbacks to childhood memories of his life with his grandmother Alex, their post-Seizure life, his drug use, and receiving a black memory box as a small boy. It is lush and contemplative, designed to build intrigue around this curious character and his strange AI observer, Dr. Easy. From there, the novel moves into the motivating premise, with Theodore investigating a VR data memory of a pre-Seizure suburban home, literally moving around a digital diorama of family life from our current age. It reads like an anthropology of turn-of-21st century, Western human culture: a fascinating array of insights into this suburban, consumer, social media landscape; the familiar turned eerie. Continuing that anthropological study, we next find Theodore and Dr. Easy in Novio Magus, “a live-in therapeutic retail environment,” “one of the arks built by the emergences for people displaced by economic collapse.” Less lush than the previous phases, it is satirical and darkly funny, though, as Nina’s review reminds us, hardly original. (In fact, one other Clarke longlistee, M. Suddain’s Hunters & Collectors, includes an almost matching setting.) Finally, Theodore wakes in a pod to find himself in a colony on Europa, with no memory of why he is there. He suspects he was complicit in his amnesia, to carry out some important plan, and there’s a lot of space opera squabbling and manipulating. Plus, a bonafide space squid.

The novel itself is best personified by the AI character, Dr. Easy, an emergent AI robot (he prefers the term emergence) covered in an ersatz skin. Tasked to observe the life of one human being from birth to death, Dr. Easy is a giant, inorganic thing, a full-on mechanical intelligence, though he rejects the label artificial because he argues his civilization is organic, having sprung from human creation and advanced on its own, far beyond the capabilities of humanity. Dr. Easy covers his hardware frame with various types of organic coverings (usually depending on his metaphorical connection to each scene) supposedly to appear more lifelike and human, although human response towards him suggests otherwise. (Much like the novel itself.)

These elusive intangibles, the slivers of mystery in the human condition, gave him an excuse to go back to Europa; he would continue with the project, test his thesis again, and prove conclusively that it was impossible to quantify the entirety of the human heart. (ch. 26)

It’s soon apparent that Dr. Easy’s task is less than easy: that observing one human’s life from beginning to end is not only difficult, but too subjective, too vulnerable to human whims, and too vulnerable to his own hands-off whims. His subject, Theodore, a professor of human culture, or intangibles, is as humanly broken as one can be, his emotional and empathetic growth stunted by years of drug abuse and bad decisions, and now living on the unsustainable and inorganic moon. Theodore, in many ways, is as inhuman as his observer, and, in many ways, this makes him the most human of all.

At least, that seems to be what de Abaitua is saying, because it’s clear from the beginning that De Abaitua knows what he is doing, which is why his novels are so riddling. He seems to enjoy disrupting the expectations of what his novels should do, to the point where it’s astounding he even gets published, let alone by a major genre publisher. Like Dr. Easy, the novel appears to wear the organic covering of plenitude and interiority, a literary skin, but underneath it all, it’s a rickety, artificial story. It moves from being a contemplation of a humanity that’s been stripped of its organic qualities, to an artificial framework of humans pretending to be organic. It’s a turn toward the unnatural, yet the plot acts as if these abrupt transitions are perfectly natural. “Life is a change of states. Stasis is an abomination,” Dr. Easy tells us at one point (ch. 19).

Just as the humanity we encounter in this post-Seizure world is an impersonation of humanity as we know it, The Destructives is an impersonation of science fiction as we know it. As the novel progresses, the organicism decays, as if the novel itself is experiencing its own AI-influenced, post-human, Seizure moment. This is not a case of an author getting too caught up in his silly plot: the abandonment of literary elegance directly corresponds to Dr. Easy’s abandonment of Theodore, to Theodore’s infiltration of the elusive Horbo loop, and the start of Theodore’s unconvincing marriage. It’s a turn from depth to artifice as the story becomes more about living data, and less about human civilization. Unfortunately, yet logically, the result is a final half that’s an old-fashioned slog to read.

Furthermore: about that unconvincing marriage. From the moment Theodore meets sexy Patricia, his employer-come-sexpot-come-wife, with her white lipstick and body stockings, it’s clear that this book has a chip on its shoulder about women. Some of this mishandling can be attributed to the novel’s purposeful use of stock sci-fi mannerisms (in the future, sexy, badass women will be everywhere, as sci-fi wants us to believe) but every plot misstep, every bad decision, and even the destruction of civilization as we know it—the Seizure itself—can be attributed to the influence of a stereotypical and misguided female character. It’s one discouraging portrayal of women after another, and it’s the only shortcoming (among many!) that throws the entire novel into doubt as to whether any authorial self-awareness was present at all.

Overall, it’s another de Abaitua novel that feels superficially uneven, yet substantially complete, and that alone makes it worthy of more commentary. It’s a gnarly book that few will enjoy in its entirety, but it’s still better written and more conceptually interesting than most books churned out in the SF world, and its flaws, for the most part, can be reconciled with its conceptual conceit. Too problematic to deserve a win, but I can’t back off from recommending it for the shortlist, for when it’s good, it’s very good, or, rather, it’s wonderful, yes, but also frustrating.