The Many Selves of Katherine North by Emma Geen: a review by David Hebblethwaite

The Many Selves of Katherine North — Emma Geen (Bloomsbury) 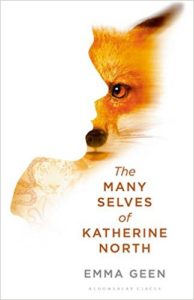 When she was young, Katherine North went on nature watches; when she sighted a fox, she would will the animal to turn and look at her:

“And, sometimes, it would. Those eyes like molten silver, nailing me back inside my tingling skin; suddenly conscious of my full bladder and the itch of every muscle to move. A few scant seconds unfolding into infinity… over too quickly as the fox would turn and run.”

There’s no suggestion that Katherine was actually able to influence the fox, but there was clearly a connection the other way—and how effectively Emma Geen (whose debut novel this is) evokes that feeling here, moving so swiftly from the fox’s eyes to the surface then the deep interior of Katherine’s being. It’s no wonder that the young girl gained the nickname ‘Kit’—a name that stuck.

Lauren, the organiser of those nature watches, introduced Kit to phenomenautism: the capacity, through technology, to project one’s consciousness into the specially-grown body of an animal, and experience its sensorium. The organisation which would become ShenCorp was looking for children to train up and employ as full-time phenomenauts, in order that humans may become more empathetic towards the animals with whom they share the planet.

Move on several years, and ShenCorp is the most successful provider of consciousness projection services (not coincidentally, it’s the only one that employs young people; adults are less able to cope with the psychological shifts involved). At the age of nineteen, Kit is the longest serving phenomenaut, having worked there for seven years. But something is wrong at ShenCorp, so wrong that it’s enough to tear the novel in two: one strand, headed ‘Uncanny Shift’, deals with Kit’s life while she works at ShenCorp; the other strand, ‘Come Home’, takes place after she has fled the company, following circumstances as yet unknown to the reader.

The business of ShenCorp is empathy, but Kit wonders whether her written reports can really capture all that they’re supposed to:

“Because how do you cram the lived experience onto a page? The words available to me were never enough. Something would always slip the sentences. Human language developed around human bodies, it never quite fits other ways of being.”

This raises the question of how Kit’s experience of animal consciousness will be conveyed to the reader on the page of a novel: you want the sense of something ‘other’, but inevitably it’s going to be mediated through familiar language. In practice, I find it most effective when we’re plunged in medias res into Kit’s animal viewpoint. For example, a polar bear:

“The scent lances my stomach: fishy pungency, rich meat, unfurling on the exhale of sea. A beckoning finger. My paws obey without thought.”

It’s not just that this is the start of a chapter,and therefore we have to work out where we are (where Kit is). The short paragraphs and broken sentences keep us off balance, pushing sensation to the fore.

Of course, it helps that each projection of consciousness is a unique, and therefore new, experience to Kit. Looking at the wider world of phenomenautism, there are times when Kit’s familiarity with the process can work against the novel. Here, for example, she joins a party of children touring ShenCorp, and observing a ResExtenda body (or ‘Ressy’, as they’re nicknamed) being grown in the lab:

“Lying in the wet gel is something that looks a little like the cross-sections found in biology textbooks. It’s animal, that much is clear— it has the stubs of what must be limbs and the fleshiness of an organic— but it’s only half finished. The red plane of flesh is stippled with creamy blots like pepperoni; the half-finished organs look like ruptured sores. The skull is an empty bowl of bone.”

The tone and imagery here are tethering this object back to the familiar, making it seem ordinary—which it may be to Kit, though one suspects it would be anything but to those children watching on. We miss a chance to imagine their wonder.

However, there are instances that reveal the strangeness of how Kit has been changed by her work. One such is when we first see her travelling to ShenCorp, and she looks at other people as though they’re another species:

“The humans here always strike me as improbably perpendicular, every chin thrust out with the confidence of a silverback. What is it that gives them such assurance? As if they’re all alphas. A suited man jostles past and I bare my teeth at his glare. This is what the city reduces you to—meat, meat that’s in the way.”

There’s a touch of animal behaviour from Kit towards the end, there; and it’s not the last time we will see such from her or other phenomenauts. But the tables are turned on Kit after she departs ShenCorp: now she is on the run in her human body and, though she may like to have an animal’s instinct for survival, there are the inevitable limitations. Here, she has leapt a garden gate and picked up a bottle of milk:

“The milk is so cold it’s more texture than taste. Still, I finish the bottle in one go, only to regret the decision as the chill wave hits my stomach. Easy to forget my Original Body isn’t as hardy as a lot of Ressies’.”

If the blurring of the ‘human/animal’ distinction gives Geen’s book its substance, the thriller plot gives it its shape—and here the novel comes a little unstuck. With two plot strands unfolding over the length of the novel, the reader is geared up to expect two conclusions: first, the revelation of whatever it was that caused Kit to flee ShenCorp; and second, the final reckoning. ‘Uncanny Shift’ builds the intrigue, as Kit is invited (not compelled, no, not at all) to work on the development of a new income stream: consciousness tourism. She’s not sure about the ethics of this, as she tells one character:

“‘[…]other subjectivities aren’t a consumer item. Their habitats aren’t playgrounds.’ I find myself searching his face beseechingly but my words make no impression on it. ‘Phenomenautism is meant to be about understanding other perspectives, not buying them as some—some—luxury items. They’re not…’ Yet, under his nonchalant look, the words fail me.”

A number of ethical issues such as this are raised as the full scope of ShenCorp’s work is revealed. But they don’t all have the chance to be explored in detail, instead becoming swept along by the tide of the plot. The big climactic revelations themselves don’t seem all that surprising or shocking in context; and placing them both towards the end takes some of the impact from the first as it’s quickly swept away by the second.

However, the real effect of running both plot strands in parallel is to allow that comparison of ‘Kit the phenomenaut’ and ‘Kit the human in the wild’ to build slowly. And it’s in another comparison where I find some of the novel’s most quietly powerful moments. Kit’s mother has dementia, and is becoming (perhaps has already become) lost to her:

“I can’t bear to talk to her like everyone else does, to sink my hands into the loose dough of her psyche and mould. I can’t bear to leave her with the imprint of my fingers. Because that’s all is left of her now, an infinitely reflecting mirror.”

Kit spends her professional life inhabiting other consciousnesses, her ultimate aim to increase empathy; yet here is a person—someone closest to her—whom she cannot reach. There’s so much going on in the novel that it can sometimes feel as though these quieter moments are in danger of being crowded out. Nevertheless, there are times throughout when the reader is pinned by the gaze of the fox, and asked to reflect on who—or maybe what—lies inside that human body of theirs.