The Power by Naomi Alderman: a review by Nick Hubble 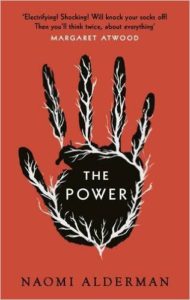 In a recent article for the Guardian, ‘How to build a feminist utopia’, Naomi Alderman briefly sets out some pragmatic measures for helping pave the way to a world in which genitals, hormones and gender identification don’t matter because ‘everyone gets to be both vulnerable and tough, aggressive and nurturing, effortlessly confident and inclusively consensus-building, compassionate and dominant’. Among suggestions such as trying to establish equal parenting as the norm and teaching boys to be able to express their emotions, she also proposes teaching every girl self-defence at school from the age of five to sixteen. In effect, this is what happens in The Power when it becomes apparent that a generation of teenage girls across the world have developed the capacity to emit electric shocks. The only difference is that this doesn’t just allow the girls to defend themselves against male violence but instead enables them to become the aggressors.

Through an episodic narrative focusing on a small number of protagonists, who are eventually drawn together, we witness global society fall apart over a period of ten years. In telling this story, Alderman depicts some violence inflicted by men on women but much of the raw power of The Power lies in a series of short, violent scenes that include the maiming, murder, sexual assault and rape of men, unable to defend themselves against transformed women. Therefore, The Power is, in part, a role-reversal story. Indeed, Justine Jordan’s review of the novel for the Guardian is subtitled ‘if girls ruled the world’. The danger of this approach is that not only does it make the premise sound like a gimmick but it also trivialises the radical impact of the novel by implying that Alderman has produced nothing more than a didactic ‘what if’ story. However, the elaborate framing of the novel generates a range of more complex and troubling meanings.

The Power begins and closes with an exchange of letters between characters called Naomi Alderman and Neil Adam Armon. The second name is an anagram of the first and the exchange is amusing because traditional gender traits are reversed. The body of the main text is presented between these exchanges as The Power: A historical novel by Neil Adam Armon. This allows Alderman to have fun by representing the character bearing her name to tease her subordinate male counterpart with regards to the ‘fetish’ elements of his story: ‘gangs of women locking up women for sex … some of us have had fantasies like that!’ On one level, this is just crass and functions to satirise similar real-life behaviour by men. On a second level, the realisation that this response is completely inadequate to the violence portrayed in the text leaves an uncanny aftertaste in the reader. The effect is similar to that of Swiftian satire in that it goes beyond expressing disgust with specific aspects of male behaviour (via the reverse parody) to evincing dissatisfaction with the human race as a whole. Why are any of us – whatever gender – complicit with the sexualisation of violent behaviour?

But there is also a deeper, temporal, level to this framing of the narrative. The exchange between Alderman and Armon appears at first to be in a version – albeit one with a Men Writers Association – of our contemporary time. As soon as we start reading Armon’s historical novel, however, we realise that this is set in something much more like our contemporary society. We are told at first that there are ‘ten years to go’ but as we read on we encounter images of artefacts from ‘five hundred years ago’. The closer we get to whatever is about to happen – ‘nine years to go’, ‘five years to go’, ‘one year’, ‘can’t be more than seven months left’ – the further in the past the artefacts are dated – one thousand, two thousand five hundred, five thousand years ago. The net effect of this is a retemporalisation of the gender-flipped contemporary setting. Alderman and Armon’s epistolary exchange is not just happening in any parallel universe but in one with five thousand years of history in which women have been the unequivocally dominant gender. The implication is that it is not just the differing biological capacities of the genders that underwrites inequality but also the long socialisation of history. Although, without that socialisation, people will simply abuse power more directly because they can.

In this respect, the novel might be seen as rather depressing. Like the dystopian works of George Orwell and Margaret Atwood, who has been mentoring Alderman, The Power seems to reveal an inherent and seemingly inescapable flaw in the human condition. While some will find this aspect of the novel frustrating, others will experience it as enigmatic. Is there some way out of this apparent constraint preventing fully liberated human relations? The intricacy of the structure and the interlocking levels of the plot are likely to ensure that The Power will generate debate and pleasure for years to come. Already, the novel has been longlisted for both the Baileys and Orwell Prizes and it must be considered a very strong candidate for inclusion on the Clarke shortlist.

Nevertheless, I don’t think The Power should just be seen as a fine example of the Orwellian type of dystopian novel. Inside all the framing, there remains a set of recognisable genre stories – chiefly those of Roxy and her gangster father, and of the runaway, Allie. In a manner that is reminiscent of the work of Atwood, these stories don’t quite work out the way we might anticipate. Ultimately, Roxy doesn’t allow her life to be determined by her father nor does she end up taking his place, while Allie manages to make herself independent even of God. To put it another way, these characters escape from the stories writing them and it is in this manner that Alderman implies that we can maybe after all build a feminist utopia by escaping from the structures of hierarchy that underwrite cycles of violence.