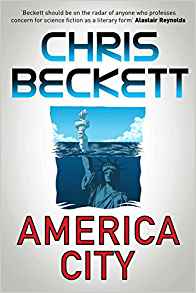 Set a century or so in the future, Chris Beckett’s America City presents us with a world transformed by climate change and the resulting land grab as storms and dust make much of the US uninhabitable.

For ordinary people the problem is exacerbated by the increasing dominance of automation.  Many jobs simply don’t exist anymore. However for America’s ‘delicados’, the sophisticated urban elite, life is still good, and the world’s problems can be ignored for a little while longer.

America City can of course be read as a warning or prediction.  However, like most dystopian fiction, the novel is as much about the present as the future. Beckett offers a forensically detailed exploration of the way our political opinions are shaped, nudged, manipulated and challenged by numerous forces, but particularly social media .

Holly Peacock, the protagonist, is a PR consultant; she creates stories to sell ideas.  Stephen Slaymaker, an ambitious populist politician, convinces her to help him drive through a controversial new policy – a major state subsidised population shift from the devastated south to the comparatively stable north.

Although a liberal, Holly finds herself drawn to Slaymaker’s vision and drive. Eventually – to the surprise of many – she comes up with a radical campaign strategy which is at first too startling even for those on the right to stomach.

Holly’s political homelessness is evoked very effectively. She feels alienated in turn by her new workmates, conservative and cynical, and by her old friends on the left. In Beckett’s future, as in our time, changing political allegiances is hard:

‘It would mean abandoning her own tribe and going over to fight another. A terrifying prospect. (Chapter 14)

It is up the reader to decide whether, or when, her irritation at her own ‘tribe’ is justified. Are they indeed smug and hypocritical in their futile gestures of concern for the suffering of America’s internal migrants? Unlike the ‘just about managing’ types who are faced with an influx of refugees in their own neighbourhoods, the lives of Holly’s delicado friends remain largely unaffected by the upheaval.

Holly, with a foot in both camps, provides the novel with a moral pivot around which different views and values can be explored.  However we are offered many other voices, including those of less fortunate characters – blue collar workers, those left behind.  Some are confronted by vigilantes when they try to settle in a safer district, and even those who manage to get a place in a refugee camp face hostility from officials and are treated like interlopers in their own country.

It is these people, as well as their better off neighbours, who Holly must win over to Slaymaker’s side.  Both AI and humans are put to work crafting propaganda which will work its way round the ‘Whisperstream’.  While Slaymaker’s own speeches are carefully reined in, covert operators use lies, hate and threats to advance his cause, ‘crafting the underbelly’ of the campaign message.  Rumours are fabricated, and coercive rhetoric lures people into thinking that only the foolish and naïve could fail to believe they are true.

In a sense much of this novel is a case study of how the ‘Overton window’ can be made to shift, and there’s a telling scene when we become aware that even some of Holly’s liberal friends are beginning to think the unthinkable.  It would be a spoiler to give away too much about exactly what is unthinkable – but readers may be able to map this particular shift onto their own experiences of ideas about what is acceptable seeming to change with startling rapidity.

America City encourages the reader to question some of their own assumptions, and feel braced by that challenge  – and then wonder whether they, like so many of the novel’s characters, are being manipulated into a false position.  But although Beckett allows plenty of space for the reader, asking questions rather than closing down debate, one message seems to come through unambiguously – the need to preserve the planet for future generations before it is too late.