In ‘The Classical Pantheon in Children’s Fantasy Literature’ she examines the place of Greco-Roman mythology in the genre, arguing that children’s literature often reveals both a preoccupation with and an antipathy for the authority of Greek gods.

For example in Hilda Lewis’s Nesbit-inspired time-travel adventure The Ship that Flew (1939) the children would much rather visit Asgard than Olympus.

“Tell us about it Pete,” she said.

“Well, it’s a book of old stories. About gods and things. Not Zeus and his crowd—a much better lot. Odin and Frigga. And Thor. And—Frey.”

An examination of the fault line between children’s fantasy and the classics reveals a recurring preoccupation with power—both the Greek gods themselves and the classical tradition of which they form part are invested with conspicuous authority.

Writers use a range of methods to call into question both the cultural dominance of the classics and the power and majesty of the gods themselves. When fantasy writers do turn to the Olympians for inspiration, the pantheon is often treated with ambivalence, irony, even resentment.

Bathos is repeatedly used to cut Greek mythology down to size.  For example the terrifying Furies find their style cramped when they are transplanted to British suburbia in Joan Aiken’s ‘The Apple of Discord’ (1968), and in Marie Phillips’s Gods Behaving Badly (2008) the Greek gods, down on their luck, are forced to share a rather grand but decaying house in London, and Apollo has been driven to make a living as a low-rent TV psychic.

The Greek gods are just too sure of them 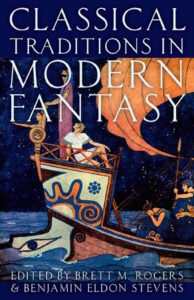 selves for the tastes of many later liberal writers. Diana Wynne Jones takes the side of figures from more marginalized mythical traditions such as the witch Baba Yaga in her mythographical fantasy The Game (2007).

And in his popular Percy Jackson novels Rick Riordan continually invites the reader to question whether we really should be siding with the Olympians against the Titans.  Riordan seems to draw on War on Terror dynamics to caution us that the Olympians are, at best, the least-worst camp.  We are forced to realize that Luke, Percy’s antagonist, is half right in seeing the gods as self-serving and manipulative:

All the heroics—being pawns of the gods. They should’ve been overthrown thousands of years ago, but they’ve hung on, thanks to us half-bloods… Their precious “Western civilization” is a disease, Percy. It’s killing the world. The only way to stop it is to burn it to the ground, start over with something more honest. (Percy and the Lightning Thief, p. 365).

Greek gods are often intriguingly ambiguous characters – even Hades is not a figure of metaphysical evil, yet the more immediately appealing gods, such as Apollo, are capable of cruelty and violence.  Perhaps this is why they seem to have increasingly offered writers of modern children’s fantasy a vehicle for engaging with the complex moral and political questions that exercise the modern world.