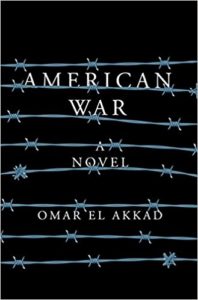 Reading American War directly after Borne is an interesting experience, if not exactly a cheerful one. Where Vandermeer’s novel carefully files the comfort of specific geography off every element of it’s world, El Akkad builds his dystopian America in painful familiarity. North and South, Blue and Red. CNN and Fox. The political and ideological dividing lines that it’s impossible to avoid in the hourly news cycle are the frame work for El Akkad’s novel. Or at the very least, the foundation.

Beginning in 2074, the novel moves forward in time along two axes. The first is the life of Sarat Chestnut, a refugee eking out an existence on the shores of the Mississippi Sea. Global warming and economic collapse have combined to drive America to Civil War. Sarat, her parents and her siblings have had sides picked for them and as the novel begins, an offhanded moment of cruelty sets Sarat, and the war, onto a singularly destructive course.

One of El Akkad’s greatest strengths as a writer is his ability to world build in the margins. Phrases like ‘The Mississippi Sea’ tell you everything you need to know and the novel is scattered with them. In a pivotal scene that takes place in New Anchorage, the reveal that neutral states are referred to as The Purple is a moment of desperately needed relief and levity. Most haunting of all are The Birds, an autonomous flock of Drones, hacked out of human control who rain arbitrary destruction down on an agenda only they can know. Then there’s the official documentation, much of it set, like the ending of The Handmaid’s Tale, long after the story has finished. This is the second axis the story moves along, driven by Sarat and driven towards the events we see mentioned.

The world building is also continually locked to the shifting perspective of El Akkad’s protagonist. He writes children, and especially children in the transitional stages of emotional maturity to adolescence, extremely well. The novel’s most poignant side plot involves the friendship between Sarat and Marcus, one of the other refugee children. Sarat is physically big, Marcus is small and frail and the two have a friendship that exists in the same hinterlands as their physical lives. There’s intimacy there, and love as is made clear in the final pages, but it’s also transitory and made all the stronger by that. Marcus and Sarat are the last good things to happen to each other and as a result remain constants for each other. Marcus in particular remains the one part of Sarat’s life not tainted with horror, even at the end.

But El Akkad’s eye for sweetness is always being driven by the novel’s relentless current. Sarat moves away from the Mississippi Sea but she’s always adrift, always carried down river by tides stronger than even she can hope to be. One of her few moments of peace sees her bathing in a river with her nephew and facing the terror she associates with water after being water boarded. In the water, but on her terms, for once. Another has her visit a coffee shop, neutral ground in the war and alone on its own strip of land. Her inexorable march to adulthood, which arrives far too early, her own private war, her attempts to find peace. All of them boil down to Sarat either fighting the flow of the water or letting herself be carried along to her eventual doom. Or release. This is a world so grim they’re inter-changeable.

The other major strength of the novel is the way that El Akkad never loses sight of the personal cost of the war. This is most commonly through the horrific attrition Sarat’s family suffers but its an idea that buttresses every element of the story. Marcus, her some-time boyfriend who leaves the camp and joins up, returns multiple times. Simon, her brother, who is critically wounded in a raid and takes years to recover, ultimately becomes the head of the Family precisely because of his being invalided out of the war. Sarat outgrows the men who radicalise her in the worst of ways and El Akkad is rarely better than when writing these scenes. Her final meeting with her ‘teacher’ in particular is something close to horrific. Now an old man, living in the woods and terrified of the vengeance he knows is coming, the adult who was a portal to the world she had no hope of reaching but could at least gouge her mark onto is revealed to be a cowardly, pathetic figure. The world changes, and everyone changes with it as battle lines and maps are re-drawn constantly. One chapter Sarat is a heroine of the revolution. The next she’s a war criminal. She never changes but the frame we see her through does.

And it’s that stability that provides the novel with both its emotional heart and the few sections that really don’t work. Sarat is easy to read as a direct answer to Katniss Everdeen of The Hunger Games. She has a similar background, similar defining trauma and a similar journey, making the best of what she’s forced to do and enacting real change as a result of it.

However, and this should be in no way read as a slight against The Hunger Games trilogy, El Akkad’s version of this story feels more realistic, Sarat doesn’t become a romanticised figurehead, instead occupying the interstitial space between terrorist and folk hero. Likewise, where Katniss chooses peace, albeit a blood-soaked one, Sarat’s final choice is for more war and more vengeance. There’s deliberate ambiguity here as we get very limited second hand accounts of her final moments but what we do know resonates all the louder for the empty spaces around it. Sarat’s final action is to save her nephew’s life even as she makes him an orphan. Her final seconds are spent being shown kindness by a man forced to watch years previously as she murdered his father, an abusive prison guard. Her legacy is in the sudden, terrible quiet below the borders of the Purple. There’s peace at the end of the novel but it’s the large scale peace of emptiness rather than the intimate peace of arms being laid down. In fact, it’s especially notable that Sarat’s personal peace comes at the expense of everyone else’s. Benjamin in particular spends years of his life hating his aunt, but denied the vengeance on her that so defined her own hatred. Sarat becomes bigger than life, becomes famous, like Katniss, in those closing pages but in the very worst way. A hinge the war turns on, a human moment of darkness in the middle of what should be a moment of light. She stops swimming altogether and lets the current carry her and everyone else, away.

This is all intensely powerful stuff and for most of the novel El Akkad subverts your expectations effortlessly and successfully. But the third act also has a seriously flat note that echoes all the harder for being in functional isolation. Sarat, in those final pages, is released from seven years in a nightmarish prison camp. She’s stooped and hulking, her physical presence turned into physical bulk and El Akkad focuses on that unduly. The intent, I suspect, is to mirror her procession towards becoming a component of history rather than a bystander. The reality is that it presents as fat shaming which, given the novel’s ongoing exploration of how Sarat’s identity transcends expectations and gender, feels as lazy and cruel as it does forced and unnecessary.

This is, make no mistake, a serious misstep. It’s the only one the novel makes but it does stand out and some readers will run aground here. I certainly almost did. However, if you can work through it then the ending is as undeniably powerful as it is earned and leaves the survivors in a place that is, if not better, then certainly different. And that’s as close to a happy ending as any of these characters could dare to hope for.

When Alasdair Stuart isn’t hosting PseudoPod or running Escape Artists Inc., he’s professionally enthusiastic about genre fiction at places like Tor.com, Barnes & Noble, The Guardian, Uncanny Magazine, SciFi Now and MyMBuzz. He’s an ENie-nominated writer for his work on Doctor Who: Adventures In Time And Space, and has written for the Star Trek and The Laundry Files RPGs, among others. Alasdair’s first collection of expanded podcast essays, PseudoPod Tapes, is available from Fox Spirit Books with volume 2, Approach With Caution, out later this year. His short stories can also be found at Fox Spirit, among other places. He lives in the UK with the love of his life and their expanding herd of microphones. Follow him on Twitter as @AlasdairStuart or on his blog, The Man of Words.