Guest Review: Duncan Lawie on Dreams Before the Start of Time

Today, we have a guest review from Duncan Lawie. This was originally published in the BSFA Review. 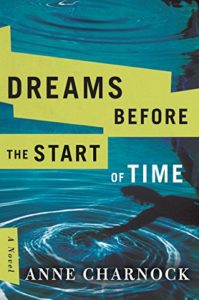 Dreams Before the Start of Time is beautifully written. The prose is clear, sometimes sparse, quite subtle in the way it provides a smooth emotional surface whilst signalling a great depth of feeling within the many characters. It is also an excellent science fiction novel-of-ideas, with clear themes and careful working out of the societal implications of new technology. How wonderful!

The scientific innovations here are in reproductive technologies. The developments and their impact are worked out over several generations; how families change and how they stay the same. In the 203os, it doesn’t seem much has changed from today. The key point is to contrast Toni’s choice to keep an accidentally conceived baby with Millie’s careful selection of a sperm donor. The next generation have new choices to make, as artificial wombs become viable technology – and as the clinics which provide this service offer (expect?) to perform some clean-up of the germ line before beginning gestation. Is it right to “outsource” your womb? Does that make you a worse mother / parent? By the 2120s, “natural” reproduction is considered backward, at least for those who can afford otherwise, as it implies that the parents are failing to protect the child from problems in the genetic lineage. Advances in technology also create other choices, other societal expectations, which have the potential to further atomise the concept of parenthood, of family. With time, “going solo” avoids relying on an unknown sperm donor. Instead, the clinic remixes your own chromosomes into egg and sperm, producing a child which is genetically 100% yours. With an artificial womb, this means there is no sexual or gender barrier to becoming a parent.

Yet, people remain people and this is a modern novel of the middle classes, echoing the sentiment of Philip Larkin that “they fuck you up, your mum and dad”. Children argue with their parents, doubt themselves as they age, wish their own children were more (or less) like they are. Reflections on the nature of Family and the changing expectation of right action are thereby built up through a network of connections and possibilities. The spine of the story follows one family across generations, with the addition of tangential stories to provide a mosaic effect. The approach allows each chapter to breathe, to be true to itself whilst also contributing to widening the frame of the story. One section I treasured has a character reading. She “utterly adores” “those authorial flash forwards” before the chapter itself then flashes forward, telling us so much more than could otherwise be contained in so few paragraphs. This novel often asks the reader to put together connections, to bring more into being through thinking it through rather than simply hammering every element on to the page.

Nevertheless, there is a narrowness of focus. Perhaps Charnock is more optimistic about the next century than I am, as the protagonists rarely consider unemployment, small wars, climate events. Perhaps they are insulated from such upset by their relatively privileged lives. The changes which affect their quotidian comfort are more visible: some of the people around them are replaced by drones in various forms; artificial assistants are assumed; digital avatars of dead ancestors sit at the dinner table. This insulation becomes more apparent with the introduction of one character who lives close to the poverty line. She and her child show clearly that much of this future will be at the service only of those who can afford it. We might be well on the way to a genetic separation of the classes. Yet, as we have been shown throughout the novel, this would happen as a result of the continuing choices of convenience, of fashion, and of individual or societal understanding of the best interest of the family.

Duncan Lawie has been reviewing SF for half as long as he has been reading it, although there was a quiet period during two years as an Arthur C. Clarke Award judge. His reviews also appears in the British Science Fiction Association’s Vector Magazine.