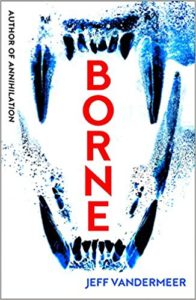 I had the impulse to leave him there, on that dusty street, leap across as many rooftops as possible to get away from him. That my life would be simpler, better, if I let him become someone else’s problem. But the sense of loss that swept in behind almost made me stagger, there on the roof. I couldn’t do it.

What is it I look for in science fiction? The answer will be different for everyone, of course, and some who followed last year’s Shadow Clarke project may have come away with the impression that I don’t really like science fiction at all, that I’ll always find something to gripe about because that’s the kind of critic I am.

The truth is that I want books to be brilliant, and that’s what I go in hoping, every time. Most of all I hope to be shocked and surprised by a new voice or a new idea or a new way with words, to be seduced by science fiction all over again. Although Jeff VanderMeer can scarcely be described as a new voice, the effect of reading Borne has been transfiguring, like water after drought. After a long dry spell in which I honestly thought I’d had it with the genre, encountering Borne has left me on a high, inspired to join in the conversation once again.

What would you have done, reader, who has been able to follow me like the Magician followed me, invisible and ever-watchful and without consequence?

The world as we know it has been destroyed, reduced to an inhospitable wasteland by the combined ravages of climate change and bioengineering run amok. Her parents dead, her childhood in the world before reduced to fragmentary memories, Rachel scavenges in the ruins. Together with Wick, a damaged and taciturn tech engineer who once worked for the Company that precipitated society’s final collapse, she scrapes out an existence in the vast carcass of a derelict apartment complex they call the Balcony Cliffs. Their lives are constantly under threat, as much from feral gangs of bioengineered children as from Mord, a giant flying bear that was once the Company’s proudest experiment, now a rapacious predator hovering like a vast and deadly dirigible over the land. When Rachel finds a unidentifiable glob of organic matter caught in Mord’s pelt, she feels a surge of fascination and brings it back with her as salvage to the apartment complex. The amoeba-like thing grows and grows. With incredible speed it learns to walk, talk and acquire knowledge. Rachel names the being Borne and comes to love it as her child. She still has no idea what Borne really is, or how he will come to change everything about their lives.

Trying to synopsise Borne is difficult and somewhat frustrating. Every précis leaves it sounding like yet another everyday story of post-apocalypse folk, when actually it is far richer and far stranger: Bildungsroman, climate-fiction, eco-catastrophe, monster movie, a Goblin-Market-like dream of an alternate reality – you could argue for any of the above and still not quite pin it down. The world VanderMeer creates is exquisitely drawn, yet there is no tedious attempt to be ‘realistic’ in a literal sense, to worldbuild a vanquished planet as so many film directors have tried to do, and Borne has little in common with most of the current strain of post-apocalyptic fiction.

The landscape of Borne is more Charlie Kaufmann than Roland Emmerich, the kind of heightened reality that results when live-action protagonists move unsteadily through an animated landscape. We encounter these invigorated tropes almost with joy, not as hackneyed repetitions, but as blissfully complete and original, pure story.

VanderMeer has stated that Borne, and in particular the figure of Mord were partly inspired by Richard Adams’s 1974 novel Shardik, in which a cult elects the great bear Shardik to be their god. In VanderMeer’s novel also, the giant bear is both avenger and destroyer, created by the Company as a weapon that finally becomes its nemesis. Mord is the personification of a natural world that has been exploited by humanity to the point where it must either throw off its tormentors or collapse and die. Rachel has ambiguous feelings about Mord and his emissaries, the smaller but equally bloodthirsty Mord proxies. The bears are terrifying and deadly, yet they are also pure, their sense of purpose and truth to themselves standing in queasy opposition to the moral indifference that has brought humanity to the brink of its own destruction:

For they were all golden bears, all huge in their hideous beauty, much taller than a man, with thick muscles that, in their stride and bounding, came at times to the surface of their fur like the hardness of a vine-wreathed tree trunk wrung and stretched taut. Yet they moved so lithe and sinuous they could’ve been snakes or otters or flowing water pushed along in a strong current.

Borne is a howl of outrage against humanity’s moral turpitude, a call to action against corporate bureaucracies that are prepared to destroy whole environments in pursuit of profit, against institutions and presidents that view climate change as a debatable theory or collateral damage:

‘What happened to this city?’ Borne asked once, in a voice like a world-weary old man.

I had no answer for him, thinking: I don’t know, it just happened. Everything everywhere collapsed. We didn’t try hard enough. We were preyed upon. We had no discipline. We didn’t try the right things at the right time. We cared but we didn’t do. Too many people, too little space. Weighted down, unable to see the way Borne saw. Maybe the Mord proxies weren’t an aberration but the end product of it all.

As polemic it is impassioned, yet Borne is never less than a human story, a story about people just wanting to be people, as Borne might prefer to put it. Every character is viewed in the round, even the monsters. The language of Borne is vivid and intensely beautiful. This is a novel in which the surreal and the real are perfectly blended, never afraid to be tender as well as violent.

Borne wears its genre influences proudly, like tattoos, the most obvious being Arkady and Boris Strugatsky’s Roadside Picnic. The desertified post-industrial landscape haunted by failed experiments in bioengineering, the greedy scavenging for deadly artefacts, the warring over poisoned territory is as shining a homage to the Strugatskys as M. John Harrison’s 2006 novel Nova Swing.

The way became less arduous once we were in the middle of the warren; there were narrow streets and pathways, and not always blocked by broken machinery or the remains of trucks, tires long gone. Torrents of rocks and concrete girders to the left, the highway of dust through it, and the factories on the right. Rocks, rocks, rocks. Pillars, pillars, pillars. All smashed to hell. I always felt small in that place, amongst the cathedrals of that age.

In an interview for Wired in 2008, VanderMeer speaks of his love of gaming. In Borne’s gorgeous flowerings of arcane iconography, its strategically opposed hierarchies, that sense we acquire with each new chapter of ascending to a new level of complexity and awareness, the surreal and uncanny fluidity of videogame imagery is everywhere in evidence. What lifts Borne above and beyond the circular confines of media novelisation is its open subversion, at every turn, of these conventions. VanderMeer’s characters are indelibly human, their predicament both as individuals and as a species resonates on a grand scale. The love triangle – for what else can it reasonably be called? – between Rachel, Borne and Wick is as brutal and heart-wrenching as anything in mainstream literature. As Borne grows in experience and strength, becoming open to outside influences and demanding ever greater degrees of independence, Rachel’s sense of loss mirrors that of any anxious parent in any mimetic novel. She understands things cannot stay the same, that Borne’s evolution away from her is inevitable, yet she fears it nonetheless, not knowing what Borne might be capable of, who he is, what purpose he might ultimately be called upon to serve.

Borne is that particular Holy Grail of science fiction, a novel written out of love and enthusiasm for the genre yet with the desire and the literary ability to develop it beyond the generic. Of all the writers who find themselves on this year’s Clarke Award shortlist, VanderMeer is the most experienced, the most knowledgeable, both about his own aims as a writer and about the innate potential of science fiction as a radical literature.

The truth is that after the literary tour de force that was the Southern Reach trilogy, I didn’t think I would enjoy Borne half as much. The novel sounded too weird to me, a bagatelle: a girl who finds a dollop of gloop in a post-industrial wasteland and makes friends with it – what’s that about? And yet when I finally came to read the book I loved it from the first sentence. Borne is even weirder than its synopsis suggests – and yet it is novels like Borne that reveal how imperfect and ultimately inadequate a synopsis can be. The only way to know what a novel is like is to experience it in full.

Far below, down below, I saw myself running along the river. I was running free, so fluid and lithe, over that rocky terrain, and I was not quite me, and, anyway, I was standing on the balcony, so I knew it was Borne below.

I hadn’t known I was so fragile, so delicate in motion. I didn’t know Borne had loved me quite so much.

In the best of all possible worlds, all winners of the Clarke Award would be books like this. Books that are resolutely science fictional, with a story to tell us about our world and an argument to make over the decisions we are taking as a species, a willingness to jump on the tail of an idea and see where we end up. Books that are robust and significant works of literature, that speak profoundly to the generation into which they are born, yet may also be passed down, if we are lucky, to those who come after. Books that rejoice in the timelessness and enduring mystery that form the linchpins of all great science fiction. 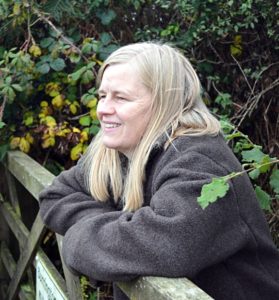 Nina Allan is a writer and critic. Her debut novel The Race was a finalist for the British Science Fiction Award, the John W. Campbell Memorial Award and the Kitschies Red Tentacle. Her second novel The Rift wase published by Titan Books in July 2017. She enjoys arguing about books in general and science fiction literature in particular, and makes these arguments public from time to time at her blog, The Spider’s House. Nina lives and works in Rothesay, on the Isle of Bute.