A Field Guide to Reality by Joanna Kavenna: a review by Megan AM 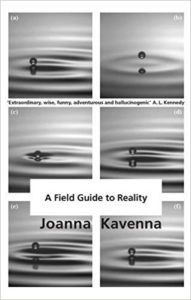 My final shortlistee is another popular novel among the Sharkes: the reality-bending investigation of light and perception, A Field Guide to Reality by Joanna Kavenna. While Jonathan approves of its class consciousness in the form of a cynical satire of academia, Maureen is intrigued by the alt-Oxford setting and intricate unfolding of universes, while Nina finds it good for “bust[ing] wide open” the science fiction envelope. The Sharke reviews, so far, have demonstrated just how malleable and diaphanous this novel is.

An Oxford waitress befriends an academic who dies and leaves to her an empty box and vague clues leading to his life’s work, A Field Guide to Reality. The hunt begins yadda yadda yadda, but the true synopsis is here:

If you’re standing there, refusing to accept that a reality is real, then there’s not much point making any assertions at all. Your assertions are, presumably, part of the unreality and therefore not real either. So you’re back to the beginning. (187)

The novel itself evades assertions. It’s a cyclical tale, a hallucinatory tale, a tale where all possible things that can happen do happen. No fork left untaken. From sentence to sentence, reality shifts, reasserts itself as fantasy, horror, science fiction, historical fiction, the mundane; it all happens at once, and it only becomes more indefinable as Eliade approaches more forks in the road, never committing to a single one, but dragging them all with her like the train of an elaborate but muddied and tattered ball gown. Is she talking to a real person? Is this actual dialogue? Is this person on the ground or is Eliade on the ground? It’s dizzying, even in its final act, where the will-they-or-won’t-they tension resolves into both as the couple realizes the impossibility of the space between them only to vaguely discount it in traditional YA romantic optimism: Famous last words! We never quite know which words were last, though, as the scene jerks into a different scene that, at first read, appears to be a continuation of the same scene. Then the denouement circles back to the beginning: a double rainbow on the meadow, which, we learn, is a circle when viewed from above: A zero, the number of eternity. There is no end to a rainbow, as there is no end to a circle. It’s simply a matter of perspective. (236)

Kavenna succeeds in writing all possible realities into the same space and time. Because of this, the plot (external and internal) is darty and superficial, inconsistent even, and some readers may find it wanting in its lack of depth, its passing references, its internal reticence, but Eliade warns us early on:

One thing I’ve learned is not to tell anyone anything. It seems by far the best option. So many people just unwind the whole thing, the moment you ask them a single question. Then you get all this stuff, yards and yards of it, mile upon mile, unraveled towards you, until you’re stumbling under the eight. I say as little as possible. Damage limitation. No one can hold you to account, no one can judge you. (32)

To do it any other way would be an infodump. Kavenna, instead, excels at the info-tease.

But she also excels in style. So far, no one has elaborated on how truly entertaining, clever, and funny this novel is. In my earlier reading through the Clarke submissions, one of the most obvious realities I noticed is just how science fiction takes itself so dreadfully seriously, how patterned and conventional it all is, how morally staid it insists on being. As a reader whose natural inclination is to hop from decade-to-decade, discovering books in 2016 that feel just like books from 1956 or 1986 feels less like nostalgia and celebration, and more like embarrassing stagnation. I think this is part of the reason why I can’t seem to get on with what should be one of the most fascinating SF novels of the year, N.K. Jemisin’s The Fifth Season (for, given the subject matter, how could it be it anything but serious? But does it have to feel so familiar?). On the other hand, the only novel on the submissions list that surpasses Kavenna in verve and vibrancy is M. Suddain’s Hunters & Collectors, but in this post-Peep Show era, the gold-standard of immature, self-absorbed guy funnies has already been achieved—it was glorious—but anything even hinting in that direction will only feel derivative and unnecessary.

Yet Kavenna keeps hitting the right notes. Her rhythm is infectious, the phrasing is fresh, her dialogue is playful, and she just seems to know how to make things sound interesting and funny. I can’t help but share a few bites:

…his general expression was so compassionate that I could scarcely look, afraid of blurting out some inner carnage and dissolving entirely. (53)

With another glance at Bevin, Anthony ordered a glass of wine. Bevin was busy morphing into an archetype representing Fury but then, it was a café, it served wine—what else could he do? (55)

Some of us have virtually dispensed with ambition. That reduces the stress levels substantially… (67)

Now Port hit his stride. He was escalating. The entire room was a pinecone, and he was a pinecone and now he explained to me that reality was a pinecone as well. If you weren’t a pinecone, you were essentially not real. I felt myself fading at the edges as he showed me Marduk, the Sumerian god, who was holding a pinecone. (85)

‘I don’t believe in that kind of thing.’ At least, not usually, I thought. Those things have to be suppressed! (165)

The question, though, that everyone keeps asking of this book, is a question I can’t even wrap my brain around, the answer is so obvious. Of course, this is science fiction. Of course, this is eligible for the Clarke. It’s about the history of scientific reasoning built into an investigative narrative. It examines the nature of light. It’s got equations in it. What more is required here? And, even better, it tells a good story while also undermining the conventions the story is built upon, to make it interesting to an adult in 2017. While Nina asserts, “it is exactly the kind of book the Clarke should and would be celebrating if it only had more imagination about itself,” I would argue it requires no imagination to include it, but a great deal of weak excuses to leave it off.