After Atlas by Emma Newman: a review by Paul Kincaid 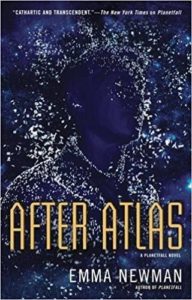 There are, in broad terms, two types of fiction. For convenience, although I am not happy with either term, I shall call them mode and genre. A genre work might include crime fiction, ghost stories, love stories and so on; they are identified by the type of story they tell. A war story would not count as a war story if war itself was not central to the story, if it did not include the familiar markers of battle, soldiers or any of the expected paraphernalia and effects of war. Modes, on the other hand, might include contemporary mainstream literature, historical fiction and science fiction. These are identified less by the the story told than by setting, style, affect, and other less readily defined characteristics. There is no specific type of story that must be told if a work is to count as historical fiction, it may be a love story or a war story or a story of political intrigue, but it must be set in the past.

These are not clearly delineated distinctions. Any fictional mode might appropriate any genre for its foreground story; any genre might incorporate any mode for its background or method of telling. Sometimes it is simply a question of emphasis. I would suggest, for example, that the Falco novels of Lindsey Davis are not in the mode of historical fictions employing the devices of crime fiction, but rather genre crime stories that make use of the paraphernalia of historical fiction for their particular flavour.

What it comes down to, I think, is whether the story is what the work is primarily about, or a means of exploring and understanding something else, something broader. This is not a qualitative distinction, it is emphatically not a suggestion that genre is better than mode or vice versa; it is simply a way of trying to understand how different types of fiction work. Within science fiction, for example, you are likely to encounter love stories, war stories, quests, satires, and many other generic models. But the genre with which sf seems to have a particular affinity is crime fiction. This is understandable: the primary impulse behind much science fiction is learning the world, finding out what is going on, and crime fiction provides a mechanism for doing precisely that. Solving the crime is not the be-all and end-all of the story so much as a metaphor for solving the puzzle that is the world. Where most crime fiction has a moral or epistemological underpinning, science fiction uses the structure of the crime story for ontological ends.

The writer of crime fiction has a unique contract with her readers. The terms of this contract have been explored in any number of critical examinations of the genre over the last century or so, but they boil down to playing fair with the reader, not solving the crime by means of some deus ex machina introduced without prior warning right at the end of the story, or making events depend upon someone acting wildly out of character. For the science fiction writer that contract may be more difficult to fulfill given the novelties that are an essential part of the mode, but the contract still pertains.

All of which is a long preamble to noting that Emma Newman has employed the appurtenances of crime fiction in the foreground of her science fiction. In the main I think she has made a reasonable fist of it. Except that for the bulk of the novel it is a better crime story than it is science fiction; and when, belatedly, she tries to make it a better science fiction, she does so at the expense of breaking the crime writer’s contract with the readers.

After Atlas is set some forty years after the events of Newman’s first novel, Planetfall; but it is not necessary to have read the earlier work since anything we need to know is explained clearly if, too often, repeatedly in the current book. Our hero, Carl, was a baby when his mother abandoned him, taking off in the spaceship Atlas. His father fell apart, as a child he nearly died, he and his father were taken in by a cult, the Circle, but Carl walked away from that while still an adolescent, only to find himself unsuited to the harsh, ultracapitalist modern world. He has ended up as a modern day slave, his life owned by his employers, who happen to be the Ministry of Justice for whom he works as their most able investigator. He is, in other words, that cliche of contemporary crime fiction, the cop with issues and a troubled past, and who is tied to his work by something more tangible than the fact that he has no interest outside work.

Actually Carl does have an outside interest: food. 90% of the population are fed by food printers that turn a few raw ingredients into a near infinite variety of dishes, but Carl is obsessed with real food. He goes on about it excessively, every scene seems to be punctuated with him eating or dreaming of food or salivating or being sickened just at the thought of a food printer. It is meant to illustrate something about this society, but we have got the message and grown weary of it long before the book draws to its end. But then, the background society, the science fictional aspect of the novel, is limited to too much emphasis on too few characteristics, so that somehow it is never totally convincing.

The crime aspects of the story, on the other hand, are wonderfully engaging and intriguing. Carl is called upon to investigate the bizarre murder of Alejandro Casales, the founder of the Circle cult, who was apparently hung, then chopped into pieces with an axe. His assistant, Theo, has disappeared, and is later found to have committed suicide. A nice neat case, certainly enough to satisfy the various conflicting authorities who all want a quick solution. Except that the more Carl looks into the case, the less it makes sense. Newman handles the development of the mystery with admirable control, teasing out the clues and questions and puzzles at the right pace and in the right amount to make us wonder whether we really are one step ahead of the detective, to make us want to keep reading on to discover more of the mystery. There are plenty of more experienced writers who could take lessons from Newman on setting up and developing a mystery.

But then she throws away all of her good work. I’m not sure what exactly goes wrong: she may have remembered this was supposed to be a science fiction novel, she may have been told to tie the book in more closely to its predecessor, she may have wanted to set up the next novel in the sequence, or she may simply have realised that she didn’t have a solution fit for the setup. Either way, the book falls apart in its final quarter. There is a cardboard villain who lacks only a twirling moustache to step onto the boards of the most hackneyed Victorian melodrama. Something happens that we have been repeatedly told throughout the body of the book could not possibly happen, and it isn’t even questioned. A solution to the murder mystery is presented that depends on two of the central characters behaving in a way that runs directly counter to everything we have ever been told about them. A motive is introduced that has been hidden throughout. The crime writer’s contract is broken in a thorough and cavalier fashion, and all for the sake of a science fiction denouement that is uninspired to say the least.

This is, in other words, what used to be known as an entertaining midlist title. It’s flawed, but not so badly that you’d regret the time spent reading it. You might even recommend it to friends as a cracking mystery, though in time you’d forget how unsatisfactory the solution is. But it’s not something you’d expect to see on an award shortlist: it is good of its type, but it is not the best of anything.

Paul Kincaid was one of the founders of the Arthur C. Clarke Award; he served as a judge for its first two years, and administered the Award from 1996 to 2006. He co-edited The Arthur C. Clarke Award: A Critical Anthology with Andrew M. Butler. He has contributed to numerous books and journals, and is the author of two collections of essays and reviews: What It Is We Do When We Read Science Fiction and Call And Response. His book on Iain M. Banks is forthcoming from University of Illinois Press. He has received the Thomas Clareson Award from the SFRA, and the Best Non-Fiction Award from the BSFA.
>> Read Paul’s introduction and shortlist.
Tags:After Atlas, Arthur C Clarke award, Emma Newman, Paul Kincaid
Share this article: