Central Station by Lavie Tidhar: a review by Paul Kincaid 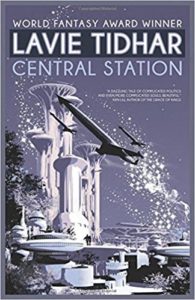 This is the future we were promised. This is what all those science fiction novels from way back told us to expect: silver-finned rocket ships taking us out to the frontier towns of Mars and beyond; clanking metal robots wanting to be human; people transformed into something monstrous by whatever is out there.

And Tidhar, whose work has always displayed an over-fond preference for intertextual references to other science fictions, makes absolutely certain we recognise that these are other writers’ futures. The digital vampire is called a Shambleau, a pointed reference to the first of C.L. Moore’s Northwest Smith adventures. There are repeated references to someone called Glimmung on Mars, which of course recalls Philip K. Dick’s children’s novel, Nick and the Glimmung, which is, of course, set on Mars. And the presiding spirit that dominates the whole novel is probably Cordwainer Smith, with the way space is repeatedly described as the “Up and Out”, as well as casual references to C’Mell and Mother Hitton. There are more, some less familiar than others; I’m pretty sure that there are references to Edward Whittemore’s little-known but brilliant Jerusalem Quartet scattered throughout this novel. Someday, I suspect, someone might produce a concordance for Central Station, teasing out all of the echoes of and references to other works of science fiction. It will be a thick volume.

Of course, no one has gone broke by playing to the geeky self-regard of the science fiction fan. In recent years, self-referential science fiction books, novels like Among Others by Jo Walton that deliberately draw attention to other science fiction works, have proved especially popular. Fans do like to think of themselves as slans, and any book that tells them their favourite reading is not just literature but a key to something real is bound to go down well. And Tidhar has been one of many to write books in which a familiarity with other science fictions is the key to understanding what is going on. But here, although such intertextual references are scattered with gay abandon throughout the book, I think Tidhar has more control over the material and uses it for more interesting and more subversive ends.

Writers of what I suppose we might call the Chrome Age of science fiction, the Moores and Smiths and their contemporaries, were in love with the glittering hard surfaces of their futures simply because they were the future. Their characters were excited by the wonders with which they were surrounded simply because they knew, in their heart of hearts, that they were in the future. The characters were avatars for the readers looking in from the outside and thinking: wow, what a spectacular time to be. But people never live in the future. We all of us live in a permanent present, a present that advances at a steady rate of one second per second and yet somehow never actually becomes the future. There are novelties in our present, but they are never consistently distributed and they become familiar very quickly; while the past, which is forever slipping from our grasp, remains for most of us more familiar, more comforting, more enticing.

In Central Station the future is all around, all those glittering, exciting, shimmering things that we learned to recognise from science fiction. But the characters we meet in Central Station do not live in the future. They live in an ever-extended present; the future has passed them by. The robots who want to be human are rusting and begging at the roadside for spare oil. The humans work in the sort of side-street café we might visit today in London or Tel Aviv or any other city. Or they have a cluttered, dusty bookshop, the sort that is disappearing even as we speak, where there are no customers because everyone buys from the internet. But then, Achimwene doesn’t particularly want customers; he just wants the books, the crumbling pulp novels that are a tangible survival from the past. Achimwene has eschewed the implant that would connect him instantly to everyone else, the node that is the very mark of modernity, because Achimwene doesn’t want the future; he wants the past. In that he is not alone; this may be a novel set in the future, but it is about the past. Every character is shaped by their memories, not by the present, and certainly not by the idea of the future. Vladimir Chong’s whole life has been blighted by memories which, within the Chong family, are passed down from parent to child, and now, as he approaches death, he has no connection to the present at all. Motl the Robotnik was once human until, in the midst of war, he was transformed into a metallic fighting machine; now he aches for a human life and a name he no longer remembers while the modern world has no place for him. Even those characters who got into space, who thus symbolically engaged with the future, do not escape the past. Boris Chong is called back from Mars because his father is dying, and we know he will inherit Vladimir’s memories, while Carmel longs for the humanity she had before she was transformed into a Shambleau on a voyage towards the outer planets, significantly moving away from Earth and into the future.

And just as the characters are tied to their pasts, so is the setting. This is Tel Aviv, that liminal city where Israeli super-modernity butts up against the Palestinian present of Jaffa. In this novel the Arab-Israeli conflict does not intrude and is apparently a thing of the past (a map at the beginning of the novel refers to the “Judea Palestina Federal Union”; that is all we are told of the resolution of what seems to be an increasingly bitter dispute), but in every other respect Tel Aviv remains liminal. The multi-storey, high-tech Central Station where silver ships set sail for the stars or bring home passengers who have walked upon other worlds, occupies roughly the location of Tel Aviv’s present-day Central Bus Station. It looks futuristic, but it’s a workaday place, as ordinary and, we presume, as scuffed and marred, as any bus station today. And the moment you step outside this would-be futuristic edifice you are in hot, dusty, narrow streets that would presumably be familiar to anyone walking around that quarter of Tel Aviv today. The future works, you can indeed travel to the stars or employ robot workers just as those old science fiction books promised; but here in the streets right outside Central Station you will encounter people who do not take part in that future because they have no interest or no funds. This is a world of crumbling infrastructure (because our infrastructure is always crumbling), a world of making do and getting by. Inevitably, this is as much the future as the chrome and glitter, but it is not the future that science fiction promised us.

Fittingly, Tidhar takes us into this future through the model of a fix-up, a form that was once ubiquitous in science fiction, that once carried to us such varied glimpses of the future as Isaac Asimov’s Foundation or Clifford Simak’s City. It’s a form that has fallen out of favour (the most recent I can think of is Accelerando by Charles Stross, another picture of a glittering future), but it works perfectly here. There are stories that are carried across several of the constituent parts, but there is no single, over-arching story. Rather, what we get is a kaleidoscopic view of people and events moving in and around the landmark that is Central Station. (Revealingly, the term that Keith Roberts coined for a fix-up was “mosaic novel”, a term that seems highly appropriate for what Tidhar is doing here.) It’s a story of the future that isn’t about the future; it’s a self-referential work of science fiction that is critical rather than unquestioning in its regard of the form; it is traditional and inventive at the same time.

Paul Kincaid was one of the founders of the Arthur C. Clarke Award; he served as a judge for its first two years, and administered the Award from 1996 to 2006. He co-edited The Arthur C. Clarke Award: A Critical Anthology with Andrew M. Butler. He has contributed to numerous books and journals, and is the author of two collections of essays and reviews: What It Is We Do When We Read Science Fiction and Call And Response. His book on Iain M. Banks is forthcoming from University of Illinois Press. He has received the Thomas Clareson Award from the SFRA, and the Best Non-Fiction Award from the BSFA.
>> Read Paul’s introduction and shortlist.
Tags:Arthur C Clarke award, Central Station, Lavie Tidhar, Paul Kincaid, review, shortlist
Share this article: