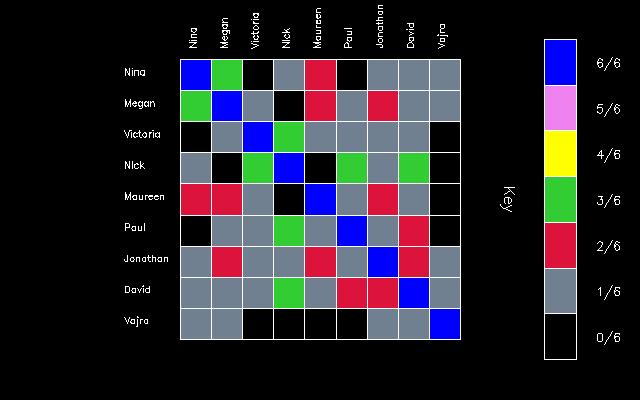 This is a color-coded table of all the jurors plotted against each other, with the color scheme giving how many books each juror had in common with the others. The blue diagonal set of boxes running from top left to lower right shows that every juror has 100% overlap with their own shortlist. Also, the table is symmetric about that line, i.e., you can look at either the rows or the columns to see how each juror overlapped with the others, as they contain the same information. So, for example, Nina had 3 books in common with Megan, none with Victoria, 1 with Nick, 2 with Maureen, etc.No pair of Sharkes broke 50% overlap (which is why two of the colors in the key don’t show up). Sharkes mostly had at least one book in common with most of the other Sharkes’ shortlists. The one person who really stands out is Vajra, but that’s more or less by construction, since it appears that he deliberately picked books that hadn’t been chosen by anyone else. (The Core of the Sun was his one exception.) Other than that, the one Sharke who is a bit unusual is Nick, who had 50% overlap with three Sharkes and zero overlap with three others.I also note that out of the total of 86 Clarke-eligible books, the 9 Sharkes collectively picked 27, so just about 30%.  13 out of those 27 came from non-genre publishers (I think). Out of all the Sharke lists, there was 1 book that appeared on 5 shortlists (The Underground Railroad), 3 that appeared on 4 (The Core of the Sun, A Field Guide to Reality, Central Station), 3 that appeared on 3 (The Power, The Gradual, The Many Selves of Katherine North), and 8 that appeared on 2 (The Destructives, Fair Rebel, Infinite Ground, Good Morning, Midnight, The Fifth Season, Occupy Me, Azanian Bridges, The Arrival of Missives). Thus a little less than half the total (12/27) were picked only by a single Sharke.
Finally, three of the five Best Novel finalists for the BSFA Award were picked by at least one Sharke (Occupy Me, Azanian Bridges, Europe in Winter).
It should certainly make for some interesting reading! (Even as it dings my bank balance – I already have three books from Sharke shortlists on order).
Tags:Arthur C Clarke award, chart, data visualisation, Philip R. Maloney, shortlist
Share this article: