The Shadow Clarke jurors have now all produced their reading lists, and the official Arthur C. Clarke Award shortlist has been revealed. It’s time to reflect on everyone’s choices.

At this point, it is worth reminding everyone once again that the Shadow Clarke jurors are not in direct competition with the Arthur C. Clarke Award judges. Our projects are complementary but rather different. The Clarke Award judges have to choose a winner at the end of their judging process, and we, the sf reading public, are not privy to their deliberations, as is right and proper. The Shadow Clarke jurors, on the other hand, don’t have to choose a winner, hence our emphasis on choosing ‘reading lists’: lists of titles that interest us and will, we hope, promote some broader discussion about the state of science fiction in 2018. And we can talk about how we made our choices. As our introductions have shown, we’ve chosen our lists according to a wide range of criteria. And yes, in some instances we are playing against the system, so to speak, but we have a licence to explore the submissions list in a different way. 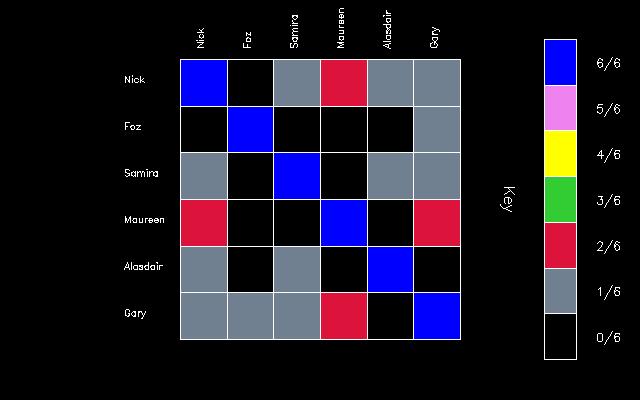 Between them, the Shadow Clarke jurors selected twenty-eight titles. Seven titles were chosen by two people and one title was chosen by three people, this last being Spaceman of Bohemia by Jaroslav Kalfař. I did wonder, as the Shadow Clarke reading lists began to appear, whether we were all going to choose it. Clearly it resonates powerfully with readers, and it has received a lot of critical interest. Perhaps unsurprisingly, it also appeared on the Clarke Award shortlist. Two Shadow Clarke jurors chose Omar El Akkad’s American War, which also appears on the Clarke Award shortlist, and one juror chose Jeff VanderMeer’s Borne. Which leaves us with three titles on the Clarke Award shortlist – C. Robert Cargill’s Sea of Rust, Anne Charnock’s Dreams Before the Start of Time, and Jennie Melamed’s Gather the Daughters – that were not considered by any Shadow juror. This means that between us all, we have chosen thirty-one different titles. Which, even given the somewhat different remit of the Shadow jurors, is rather more variation than I was expecting.

The big question – indeed, the one question we should ask every year when the Clarke Award shortlist is announced – is what does this shortlist say about the state of science fiction publishing in the UK in 2017? That there is comparatively little overlap between the two groups of titles chosen seems significant, suggesting perhaps that there is a lot of interesting science fiction flying just under the critical radar. Certainly, there were a surprising number of novels that I’d not been aware of. In which case, I think we can safely say that both the Clarke Award and the Shadow Clarke project are working well in drawing greater attention to the wealth of material that’s out there.

It’s fair to say that the Shadow Clarke jurors are intentionally reading around the Clarke Award, as becomes evident when you look at their rationales for the books they chose. For example, I made a conscious decision not to look at titles that were being touted as ‘shoo-ins’ for the shortlist, a decision which has turned out to be more interesting than I’d initially anticipated, given that most of the alleged shoo-ins don’t actually feature on the official shortlist (though one or another Shadow juror has picked all of those I thought about so we’re certainly going to have a conversation about those books, if not the conversation I had first imagined). My reasoning was that I deliberately wanted to look past the supposedly obvious choices and push my personal boundaries a little more, testing myself against writers otherwise unfamiliar to me, but also hoping to answer some questions about what sf means to me. Yes, there was also an element of personal taste, and even sentiment. Because that is how we make choices.

And talking about how we make choices is something the Shadow Clarke jurors are able to do. I’m genuinely fascinated by how my fellow jurors set about the task of selection. As it turns out, they seem to have followed variations on a similar theme, placing particular stress on various issues according to their individual interests. Nick Hubble made a very deliberate attempt to produce a set of choices that mirrored the structure of the BSFA Award’s novel shortlist, with a certain emphasis on representations of the personal in science fiction as well as consciously choosing different kinds of novel. Alasdair Stuart focused on work pushing the boundaries of sf, in particular choosing novels by newcomers. Foz Meadows makes a point that I think we too often overlook, namely of not just choosing books for the issues they represent but because we actually want to read them. Gary K. Wolfe dwelt on the difficulty of making choices at all, worrying as much about what is overlooked as about that which is chosen, which reminds us again that awards shortlists must inevitably be imperfect. Finally, Samira Nadkarni raised an issue that has begun to interest me a good deal of late: that sense that things are not as fragmented as we might imagine, that there is a sense of a greater coherence lurking behind the categorisations that seem to bedevil fiction publishing generally these days. Not so much pushing boundaries as collapsing them altogether.

I note too, that although we have mostly chosen very different titles, we are all clearly thinking about how certain themes are represented in science fiction over and over, be it the post-human, living in a post-apocalyptic world, the relationships between humans, animals, the environment, not forgetting an interest in narrative form as well. These novels keep circling round those same ideas, addressing them in different ways. In our various reading lists, I see a huge amount of potential for comparative discussion. Which is, of course, what is also almost certainly going on, out of sight, among the official Clarke Award judges.

Because, looking at the official Clarke Award shortlist for 2018, I have the sense that this year the judges are also to some extent reading around expectations of the Award, and have been thinking about the same kinds of things the Shadow Clarke jurors have been thinking about. I anticipate a number of ‘what were they thinking?’ commentaries, lamenting the absence of much-fancied books, such as Nina Allan’s The Rift, Nick Harkaway’s Gnomon, N.K. Jemisin’s The Stone Sky, Paul McAuley’s Austral, Adam Roberts’ The Real-Town Murders, or Kim Stanley Robinson’s New York 2140, but while it’s always sad that this title or that one is missing from the shortlist, rather than lamenting an absence, the more vital and more productive question to ask is ‘why might these six particular books be on this list?’

Having not yet read all of them as yet, it’s a question I can’t yet answer, but my initial feeling is that this shortlist, accidentally or intentionally, and does it even matter either way, is very even-handed in its approach, with a broad range of ideas addressed. Indeed, in many ways it seems to follow Nick Hubble’s selection process, which in turn suggests to me a conscious effort to attempt to actively reflect the current state of the genre. It also strikes me as being remarkably complementary to the various Shadow Clarke reading lists, which suggests that we’ve got a lot of productive cross-list discussions ahead of us in the next few months as we all try to figure out where science fiction might be going in the twenty-first century.

Maureen Kincaid Speller is a critic and reviewer. She is Senior Reviews Editor at Strange Horizons, and Assistant Editor of Foundation: the International Review of Science Fiction. She also reviews for Interzone and Vector. She is a former Arthur C. Clarke Award judge, and a former James Tiptree Jr. Award judge. She also blogs at Paper Knife.