In an interview shortly after the release of the movie, Cloverfield scriptwriter Drew Goddard talked at length about a scene that was almost shot during the tracking shot across the military staging post that you see here (WARNING: This gets gooey):

One of them, a grizzled Colonel, made it into the movie (He’s the ‘Rack ‘em and pack ‘em, we’re phantoms in 15!’ chap). The other two, a brilliant, beautiful scientist and a chiseled, Dirk Chestmeat hero, did not. They were going to be delivering the sort of dialogue that kicks off the third act of traditional monster movies. You know the sort of thing:

‘Dear God, man! The Hammerdown Protocols will be activated in under an hour! THERE’S NO TIME!’
‘The Doc and I will MAKE TIME.’

It made everyone in the production office laugh every time they read it. It made it, as I understand, to the draft before shooting before it was cut. It was cut BECAUSE it made them laugh. It was a reassuring moment, a reminder that the monster movie you expected to watch is happening, just off to the right of what you’re seeing. It cut the tension, in a similar way to the moment in M Night Shyamalan’s Signs where one character draws a house, in flames, with a familiar looking tinfoil hat wearing family dead outside. The message in both cases is simple:

This is not the monster movie you were expecting. Good luck. 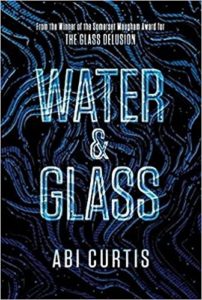 Water & Glass is the story of Nerissa, pressed into service on the Baleen to look after the ship’s animal population. The last ship to make it out before a final, catastrophic flood, the Baleen is a floating village that’s one-part submersible, one part ship, and one part flying coach class forever. Nerissa, like everyone aboard, is numb with grief. Nerissa is pregnant. Nerissa is increasingly convinced something isn’t right on the ship. And Nerissa is correct.

The chapters are short and nervy, Nerissa’s memories almost entirely tactile as she recalls working in animal shelters, the Ballardian drudge of living in a partially-flooded tower block and the brief, shining science fiction glory of the Mithras Institute and the job she holds there. Everything about the book, from the way animals are often described structurally to the way Nerissa stumbles through her PTSD-defined life, is given a tempo by these choices that, in turn, is defined by that selfsame PTSD. The focus shifts constantly, moments of the past drilled in on for pages on end while days on the Baleen glide by. It’s a novel about a society, and a woman, living in the moment before the wound is truly felt. Knowing it’s there, endlessly testing it or smiling fixedly and pretending nothing is wrong when everything is.

That staccato journey through grief is vital to the novel and not the five-stage process either. Curtis eschews anything so comforting for the simple, temporally dilated, reality of living with loss. Many aboard the ship throw themselves into routine, at the Socials, or working their stalls and choosing not to realize all they’re doing is trading a set amount of items inside a closed circuit. A character we meet late in the novel attempts to process his grief by creating wonderful, ornate glass sculptures of the cities that have been lost. The act of glassblowing, a family tradition, is intended here as archival, rebellious, and therapeutic all at once. It’s gorgeous, honors the world that’s now far beneath the waves and as fragile as it is, ultimately, meaningless. Relics of the old world only ever take up room in the new. That’s a powerful message for genre fiction in general. For dystopian fiction it’s doubly so.

That journey is tied both to the larger arc of the Baleen and to Nerissa’s own. This is one of the smartest things Curtis does in a novel absolutely full of smart choices. Nerissa’s job is something she can do automatically, the muscle reflex and function of care and attention for those other than her something easier than thinking about her own situation. It’s no surprise that as she slowly wakes up to what’s going on, she becomes aware of how difficult her choices are. It’s no surprise either that the reveal on her pregnancy comes a few chapters in. She faces it at the same time as we do, slowly surfacing in her life even as the Baleen dives.

This mapping of personal and psychological journeys onto a physical one would be impressive all by itself. But Curtis has two other tricks up her sleeve, or in one case, hiding in the walls.

The Baleen is haunted by two stories. The first is the story of the world they left behind, expressed through the Grief ceremonies that so horrify Nerissa and through Nerissa’s own inability to move on. The second is The Stowaway. The idea of The Stowaway is introduced early on and we get multiple versions of their story. In one, they’re a V or Robin Hood-esque figure. In another, a woman who has stowed away aboard the Baleen to be reunited with the love of her life. In each case, The Stowaway is a partly fictional being, someone who lives in the spaces between the stories that make up the ship as much as its deck plates do. Someone who has found their own path in a place where everyone’s path is supposedly rigidly defined. The Batman of the Ballast Tanks.

The idea of seeing a story like this from this angle, instead of being centered, gives you a look at the oddly comforting way of life aboard the Baleen. This is a pressurized village as well as a village under pressure. The Stowaway is their release valve, the polite story they tell each other to convince themselves their stories are not already laid out before them. That makes the eventual reveal that the Stowaway is the Captain of the Baleen even more unsettling. The roguish hero is, in actuality, the authority figure. The authority figure in turn is an exile on their own vessel and the person steering has very different ideas as to destinations than anyone else.

This revelation propels us into the final third of the novel, where Curtis reveals the second trick she has: that nothing is what it seems, not just because of the nature of the story, but also because of the positioning of Nerissa in this place at this time. It would have been easier to write a version of Water & Glass where Nerissa is a tough, determined biologist who discovers the terrible, evil truth about the events on board the Baleen. Battling against a post-human conspiracy, she discovers the depths humanity will go to even as her own heroism surfaces.

I went a bit overboard (OH GOD HELP I CAN’T STOP) but you get the point. There’s a completely functional and immensely fun version of this story that puts it solidly in the Hunger Games/Limetown bracket of ‘tough heroic female lead discovers something terrible and vows to defeat it.’ I love stories like those, especially when they’re folded into this kind of post-apocalyptic subset of fiction.

But what Curtis does here is untidier, harder to achieve, newer and ultimately more rewarding. Nerissa is living day to day after losing everything, so she isn’t party to what would be the central plot in a more traditional dystopia. The parts she discovers, especially the transhumanism elements of the final act, feel earned and contextualized precisely because she discovers them when she does.

Nerissa interacts with the plot to save the genetically enhanced individuals when she begins to move out of herself. That plot, up to and including the fact the Baleen is actively steering away from land, could so easily be operatic, high intensity, low complexity glorious nonsense. Instead, here, it becomes the polite, cautious courtesy of some of the last people left alive. Of course, the Captain is allowed to skulk off and hide when he’s ousted, of course those running the ship are polite and understanding enough to let a party leave when they pass land. Of course, when the Baleen is bottomed out by a colossal squid, there’s evidence of buildings outside on the seabed.

The world has changed. And the choice that everyone now faces is to go along for the journey, making it its own reward and keeping to the old ways, or to stop and make something with where they stand.

The fact there is no right answer here proves this is something more than an off the shelf dystopia. It’s a story, fundamentally, where everyone is the hero. Small acts of bravery, from attending grieving ceremonies to making crepes, define the book and in doing so embody, and celebrate, two unique schools of thought. The belief that community solves all ills and the belief that when you strike out on your own, on your terms, is when you’re at your best. Looked at that way it’s no wonder Nerissa ends up with perennial escapologist Molloy the woolly rat for company. He’s the first one to get out.

Water & Glass is a gentle, determined, and unblinking look at the horrors of grief and what it stops us feeling. It’s a prequel to a dystopian novel that will never be written aboard a tyrannical submarine. It’s the story of the final days of dry land and the final journey Nerissa makes. It’s complex, compassionate, and humane, quite at home in the ambiguous waters between dystopia and utopia. And it couldn’t be a better choice to kick off my Shadow Clarke reading.

When Alasdair Stuart isn’t hosting PseudoPod or running Escape Artists Inc., he’s professionally enthusiastic about genre fiction at places like Tor.com, Barnes & Noble, The Guardian, Uncanny Magazine, SciFi Now and MyMBuzz. He’s an ENie-nominated writer for his work on Doctor Who: Adventures In Time And Space, and has written for the Star Trek and The Laundry Files RPGs, among others. Alasdair’s first collection of expanded podcast essays, PseudoPod Tapes, is available from Fox Spirit Books with volume 2, Approach With Caution, out later this year. His short stories can also be found at Fox Spirit, among other places. He lives in the UK with the love of his life and their expanding herd of microphones. Follow him on Twitter as @AlasdairStuart or on his blog, The Man of Words.