Stuff Your Face: Hubble on Luna

As I said when making my selection of books to review for the Shadow Clarke, I didn’t expect to see Ian McDonald’s Luna: Wolf Moon on the shortlist. Having read it, I don’t have any direct criticism of the Clarke jury for neglecting it but that is not to say that I didn’t enjoy the novel. In fact, I enjoyed it very much and also its predecessor, Luna: New Moon, which I read immediately beforehand. That, of course, is one of the problems with considering a sequel or volume from a series for an award; it is going to be difficult to judge it without knowledge of the preceding story. Especially, when, as in this case, we are dealing with the middle volume in a trilogy which directly picks up strands from the first volume and also does recognisable work in setting up its successor. Therefore, despite the fact that Luna: Wolf Moon contains a strong narrative arc of its own and leaves the reader feeling as satisfied as if they have read a standalone novel, it is nonetheless not directly comparable because it is not entirely self-contained. Experience suggests that judges are generally inclined to favour the single-volume work (and on a practical level they are probably unwilling to read earlier series volumes on top of lengthy submission lists). 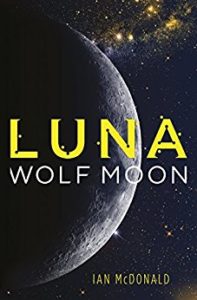 So far, so obvious. But is there an alternative way of considering the issue? For example, what if we had a set of critical values that placed more importance on infinite rather than finite forms? From such a perspective, multi-volume texts which promised a never-ending plenitude might be considered more complex and demanding, but therefore also more potentially rewarding than single-shot texts, which could be dismissed as easy pleasures. Just as the apparent virtue in living austerely can be ascribed to an amalgam of masochism and misplaced pride, might not the apparent gluttony of wanting it all be redeemed as the ideal mode of ethical and political interaction with the vastness of the world around us? What, in short, if we used the same criteria to judge art as we use to categorise cake?

McDonald provides us with an extended rumination on cake about 270 pages into Luna: Wolf Moon as Lucasinho Corta tries to take the mind of his niece, Luna, off the rather precarious position in which they find themselves: stuck out on the surface of the moon in a patched-up rover trying to drive to a far-off shelter. ‘Cake is the perfect gift,’ he expounds before going on to argue passionately for not only its social and scientific value but also its subtlety:

‘Just one cupcake in the right place, at the right time, can say, There is no one but you in the whole universe right now, and I give you this moment of sweetness, texture, flavour, sensation. And then there are times when only something huge and stupid will do, like something I’d jump out of in full make-up, with icing butterflies and birds and little bots singing soap-opera songs, and it heals hearts and finishes feuds.’

Altogether, I found McDonald’s two and a half pages on cake to be one of the most pleasurable and engaging diversions I’ve read for a long time. But he never forgets the most important question of all with respect to cake: ‘Who’s going to get a piece and who isn’t?’ That is the question that we would do well to ask about art too. For if art is finite and self-contained, then who is going to benefit from it? This isn’t simply a question of access. Even if we could overcome all forms of inequality and implement the technological means for all to read texts, there would still be an issue concerning the privileging of self-contained virtues over the messier and more heterogeneous nature of the real open-ended texts: multiple volume series. This privileging is not primarily a manifestation of cultural snobbery as is sometimes assumed but a rather more basic consequence of the economics of class-based societies. Put simply, the few don’t think they can have their cake, if the many are eating it. However, as McDonald and Lucasinho eloquently argue, the whole point about cake is that its value is not based primarily on its scarcity but on the creative labour, which is to say the work that goes into baking it.

It is no coincidence that the cake lecture takes place in the extended sequence of set-piece surface encounters in the closing third of Wolf Moon. On the one hand, McDonalds’s characters are only ever a suit failure or dome depressurisation away from a quick, nasty death and they live all the more intensely for always being aware of their mortality. Hence Lucasinho’s other passion beside cake is for sex; also in as great a quantity and as many varieties as possible. On the other hand, the moon provides a perfect means of illustrating the precarity of existence in the kind of extreme neoliberal capitalist future in which there is no public sector or social security safety net. In the Luna books, the minute someone arrives on the moon, the tab starts running for the cost of their consumption of air and other essentials of living. Unless someone is an actual member of one of the leading families, then their credit is only as good as the contracts they hold (negotiated with the help of their personal AIs).

It is particularly significant, therefore, that McDonald does not present Wolf Moon, or its predecessor, in stereotypically dystopian manner but actually has several of his main protagonists explicitly defending the individualised culture of contract and consent that has arisen within it. Lucasinho’s father Lucas, exiled on Earth following the events of New Moon, is completely horrified by a state of affairs most of us take for granted: ‘You pay taxes, but the law doesn’t allow you any say in how they are spent, let alone the option to withhold them when you want to influence Government policy. How is this a good contract?’ Later in the novel, Lucas’s sister, Ariel, delivers a scathing criticism of democracy: ‘In a society with low benefits to participation you end up with a majority of free-riders and a small engaged political caste. Leave democracy to those who wish to practise it and you always end up with a political class.’ Instead, she points out the virtues of a system in which everyone is responsible for their own life, security and wealth and therefore all are engaged in society. McDonald makes one positive consequence of such a form of civil society abundantly clear by showing that the question of discrimination over sexual identity simply does not arise in a world where people may freely have sex with anybody else (with virtual options available via ‘network sex cabins’) subject only to mutual consent.

Although, on one level, I am arguing that the value of Wolf Moon lies in its extrapolation of social and economic systems, I’m not trying to say it should be judged as a novel of ideas rather than as ‘literary fiction’. Art is not immutable and eternal. The whole point about a literature of extrapolation (hey, we could call it ‘science fiction’) is that it shows us that cultural and aesthetic values change in accordance to shifts in social relations. In a world (or a moon) with ‘a system of accountability that engages every single person’, art will function very differently from the hierarchical structures we are familiar with; more like cake, perhaps. It’s not an accident that the works, such as McDonald’s, which show us these changes most clearly tend to be multi-volume series whether we are talking about Kim Stanley Robinson’s Mars trilogy (1992-6), Iain M. Banks’s Culture series (1987-2012) or Ann Leckie’s Ancillary trilogy (2013-5). Standalone novels can show us many things but they are also just as much a product of publishing history as trilogies or series. The latter don’t exist purely to meet commercial objectives but because at their best, they show us things that standalone novels can’t.

There are times when we want to be ascetic, most often when we choose to put on a public face of seriousness, there are times when we crave the intimacy of the single cupcake ‘in the right place, at the right time’, but there are also times ‘when only something big and stupid will do’ and what we need is a Lucasinho Corta jumping out of our cake in full make-up. It’s not good to always restrict ourselves to the serious contemplation of literary themes and the aestheticized politics of self-control. Sometimes, dear reader, it is necessary to stuff your face with full-blown genre SF trilogies.

Nick Hubble is an academic working in the English department at Brunel University London, where they teach modern and contemporary literature, including Science Fiction and Fantasy. In addition, they have reviewed SFF for journals including Strange Horizons, Los Angeles Review of Books, Foundation and Vector. 2018 is Nick’s second year on the Clarke shadow jury.