The Core of the Sun by Johanna Sinisalo: a review by Megan AM

The Core of the Sun — Johanna Sinisalo (Grove Press UK) 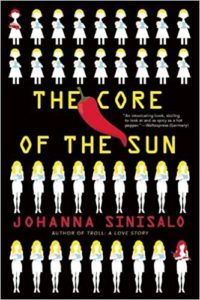 Johanna Sinisalo’s The Core of the Sun is a tale about loss, in the form of a gender-stiffening social experiment wrapped in a family drama murder mystery, suffused with oppressive norms, self-delusional recounting, and fabulist nostalgia for a world that once was that actually never was. It’s the kind of novel that joins the ranks of extreme, performative, sociological SF, in the vein of Brunner, Ballard, and Pohl, and the feminist dystopias of Atwood, Russ, and Tiptree. It’s the kind of book that people will say doesn’t belong because a.) it isn’t needed in this age of post-women’s lib, b.) its agenda involves too much agenda, and c.) it isn’t science-y enough. But, as the list of authors cited above indicates, precedence invalidates these kinds of arguments.

Legislated gender is the core of the tale, where not far in our recent past, Finnish society has perverted its liberal roots, designing a padded cell utopia of well-cared-for and easily-labeled citizens. Termed a eusistocracy, the Latin essence of which basically means ‘it’s all good if you stay in your place,’ it’s a nation where women really do go to college to earn their M.R.S., where gender fraud is a thing, and where the mating market is subsidized, with government-sponsored beauty rituals and body-perfecting salons becoming cultural imperatives for women. In this altered Finland, there are four genders: femiwomen and mascos, and, barely tolerated, neuterwomen and minusmen, while all social, economic, and political efforts are geared toward cultivating the lifestyles, pairings, and reproduction of the former two groups, and suppressing the latter two groups.

(When put like that, defense for The Core of the Sun’s presence on my Shadow Clarke shortlist may be less about its scientific and speculative foundation, and more about whether it even qualifies as fiction.)

About the science, though–not that it matters—but if we still want to fetishize data-driven extrapolations in science fiction, it’s fair to say Sinisalo has done her homework, drawing from familiar sources to arrive at an intelligent, surprising, and horrific alternate vision. Connecting the dots from the eugenics studies of the 19th and 20th centuries, using Dmitri Belyaev’s behavioral genetics experiments with foxes, Sinisalo arrives at this alt-world utopian-dystopia timeline which diverges from our own sometime just after WWII. The popular sexist and racist pseudoscientific beliefs of the day lead to this alt-present Finland where eugenics practices have been applied to human beings for the sole purpose of organizing people into neat, tidy, and easily controllable categories based on gender.

A convincing vision on its own, Sinisalo doesn’t stop there. Instead, she uses her narrative frame to deconstruct this society, revealing its oppressive and abusive tendencies through the drama of two sisters: the protagonist, Vanna/Vera/V, a neuterwoman who can pass as a femiwoman; and her younger sister, Manna/Mira, a true femiwoman. (The sisters’ multiple names being another symptom of a society that replaces personal identity with social labels.) Illustrated through the claustrophobia of such labels; the limitations on a woman’s agency as redress for males’ loss of status; and blatant, cold-blooded violence against women, the realities of gender oppression are pervasive and real in this world, and, unfortunately, identifiable in our own. V describes her own experience: “Every time I go out for a walk the realities of a [femiwoman’s] life are breathing down my neck” (ch. 16), whereas her femiwoman sister, whose “intelligence was almost entirely social intelligence” (ch. 11), and who “really thought that ring on [her] finger was a magic charm that would let [her] live happily ever after,” (ch. 24) is murdered by her husband, and her disappearance barely registers publicly.

In order to cope with this pervasive sense of loss due to her sister’s death, as well as her own identity, V turns to drug abuse by way of the chili pepper, an outlawed substance (among many others) in this Finland, though the exact metaphysical reasons aren’t fully revealed until the end. Here is where the narrative distancing is most effective, particularly because the translucent, epistolary presentation would otherwise feel like any other superficially internal YA novel. Leaning more toward the incite-pain-to-block-pain effect of self-harm techniques, rather than the recreational effects of other drugs, V’s addiction to chili peppers helps her to forget about her many losses, while her eventual tolerance to chili peppers inevitably leads her into the dangerous worlds (for a femiwoman) of agriculture and guerilla marketing.

It’s fair to mention that all of this is presented out of order, conveyed through a collage of multiple, mostly first-person sources to maintain the interest of an audience hooked on ever-changing social media feeds, making it not the deepest presentation of a serious, powerful novel, but it is effective all the same.

While most readers will want to compare The Core of the Sun to Clarke award-winning The Handmaid’s Tale, the social framework is more like Suzy McKee Charnas’ Walk to the End of the World, but more palatable and convincing in this relatable, modern form. Like Charnas’ disturbing novel, “the domestication of the femiwomen” is an intentional process, cited in the government literature of this alternate Finnish-verse, though the femiwomen of Sinisalo’s world are treated more like housepets than the barnyard chattel of Charnas’ world. Moreover, although this alt-Finland is arrived at by less violent means after a few generations of genetic manipulation and gender legislation, it is similarly justified to support for the growing masses of undesirable men who have suffered under the promotion of women’s liberation, which is blamed for artificially limiting sex as women have learned to withhold their sexuality or use it as an object for extortion (ch. 28). Again, this doesn’t really feel like fiction when the internet has brought into public awareness a large contingent of actual, real people with similar points-of-view.

While I’m questioning its status as a fiction, Sinisalo herself seems most insecure about the novel’s sci-fi qualifications, going to such an extent as to borrow from the lexicon of Wells’ The Time Machine, applying the terms eloi and morlock as slang to informally label the femiwomen and neuterwomen, respectively. Given the amount of extrapolative work put into the political basis of the tale, not to mention the botanical details sufficient to support the metaphor of chili cultivation, the Wellsian terminology is a distracting and unnecessary detail, undermining the rest of Sinisalo’s thorough thought-process by drawing attention away from it with fannish pandering.

Furthermore—and this is less a criticism than just something to point out, and should cast no doubt upon the literary value of this novel—while I’m often intrigued (but less often convinced) by sci-fi criticism of so-called “nanny states” (the other extreme is far more frightening to me), it’s an alarming trend for progressive fiction to employ such libertarian rhetoric. While state-sponsored gender oppression is a very real and unacceptable thing, the secondary details of this novel send up several anti-welfare red flags that throw into question the novel’s core ideals. This is, most likely, a result of examining this book with American eyes, whereas Finnish politics is likely more nuanced than the clumsy two-party tug-of-war I’m used to seeing, but anything that borders on disapproval of social welfare programs in what appears to be a novel promoting the positive welfare of individuals might turn off some observant readers for whom it was originally intended. If anything, however, that constant philosophical tension between the individual and the community is an underlying plot conflict that should, at least, make things more interesting, and shouldn’t negatively impact its literary value. (Sometimes we need books we don’t completely agree with.)
Despite those few misgivings, it’s still a persuasive and interesting take on feminist dystopian fiction, even for those well-read on the classics, and especially for those who haven’t yet found a satisfyingly modern approach to feminist SF. Differentiating it from the herd, the nostalgia for a non-existent world of gender freedom is The Core of the Sun’s most tangible characteristic—perhaps the only real emotional tug in a story that asserts its gravity through the distance of unread letters, the blunted trauma of death, and drug-slanted memories. The world V remembers during her childhood in Spain is a world that has never existed; any reader will recognize V’s infant memories of comfort and belonging in Spain are made of unreality and childhood innocence, for playing with trucks is still a rare and often discouraged behavior among girls, anywhere on earth, even in this timeline.