The Establishment: Occupy Me vs. The Power

Two novels that don’t appear to have anything in common, but are written by two powerhouses of opposing camps of the British literary community: Clarke winner and regular fan favorite, Tricia Sullivan, and Baileys Prize winner and regular contributor to various media on all things sci-fi, Naomi Alderman. Within the cloisters of British science fiction, these are two famous SF writers with a persistent presence in the field, yet neither has managed to vault over the high, imposing barbed walls of American commercial success.

Occupy Me by Tricia Sullivan 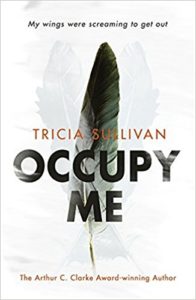 Technically not part of the “most famous, most advertised” bloc of books on the Clarke shortlist—at least from my American perspective, where Sullivan is not a well-known name—but as a previous Clarke winner and regular nominee in the Clarke game, her presence on this year’s Clarke list is not unexpected. Part of a group of celebrated science fiction authors on the British scene, Sullivan is commended for her artful blending of science fiction and literary qualities. This is the first novel I’ve read by Sullivan.

I think this novel is intended to be funny. The prose is carried off in a careless, garbled way that I think is intended for humorous effect, but even as I glance through the pages for this review, it strikes me not as funny, but as pointedly careless:

I would not let my hijacker freak me. I would not. I would have control.

The protagonist, Pearl, is a flippant kind of person who sometimes nails a funny line or two (I thought about calling emergency services and then remembered that I am emergency services, being an angel and all), but overall, her flippancy is contagious and I could never quite muster up the energy to care about her size, her strength, or her stolen waveform launcher hidden in a briefcase that might or might not involve a pterosaur. She seems fine without it, so her manic pursuit and everything after strikes me as overkill. This person might be too exhausting for me.

But it seems like something I should enjoy. Occupy Me delivers an almost entirely stream-of-consciousness narrative in experimental fashion, following intertwining threads of three separate consciousnesses that go in-and-out of three-dimensional living space.

But that’s what it is: experimental fashion. A putting on of experimentation, without achieving anything new or noteworthy, only an affectation of what experimental narratives might look like to readers who don’t quite recognize the inner workings of narrative structure, original creativity, and stylistic interweaving of plot and theme. It is, in less eloquent terms, a stream-of-irrelevant-nonsense.

The only reason Kisi Sorle’s waveform had been able to steal my launcher in the first place was because his pattern had been stored inside me and I hadn’t seen the hijacking coming.

Forgive me if I don’t care, but it’s the carelessness of the prose, the flightiness of the ideas, and the lack of motivation for the story that fail to grip me. If the story hardly seems interested in itself, how can I be expected to?

I can’t help but wonder if this book would work better as a graphic novel: the frivolity of the action, the jerky dialogue, the excessive personality of those involved seem ripe for a more truncated and colorful presentation. It might also help to balance the sensory overload that comes from such a heavy-handed use of multiple tropes.

But I hesitate to generalize my experience to anyone else because I also wonder if my reaction is partly due to the copy formatting of the US e-book version, which allows for so little white space, the text compressed with hardly an indent or break between paragraphs and dialogue dashed and protracted, that perhaps the formatting gives the impression of impulsive garbledness that might be clearer in a cleaner layout. There’s an urgency in this formatting that makes the story feel clingy, performative, awkward, perhaps more than story deserves…

But even with that terrible formatting in mind, it’s a story that establishes little more than a contrived connection with fashionable anticolonial soapboxing, but does little to mask that this is really just a kitchen sink blurby kind of book about angels and multiverses and weapons and terrorism and junk yards that means nothing more than the chunks of protracted, silly dialogue about frivolous, silly things.

-We were doing his waveform a favour, whether or not he can see that. The alternative would have been to put him in the library with all of the others. He probably wouldn’t have risen up then. He would still be waiting for another chance at life.

How can you have a library on a chunk of space rock?

-In our wings, of course. Can’t you feel the open spaces in your feathers?

I can feel the astronomical events in my feathers if that’s what you mean.

-It is a question of levels. Of folding. We can store materials in HD but the Immanence left us behind. If the plasma shield goes, so will we and then the gates will be lost to everything we have collected.

(Yes, that’s the kind of formatting I’m talking about. It’s all squished together like that.)

The gratuitous infodumping within dialogue is enough to set this book aside after the first few chapters, but it took me longer to notice the author’s taking of privileges to depict characters she is not adept at depicting. I realize this is a hot debate within literary communities, and many of my own friends and family argue that white authors should never write about the non-white experience—and their opinions matter more than my own in this regard. I tend to be more open to any attempts to make fictional worlds look more like my own, which is not very white, however, I would expect it to be done well, and carefully, but the protagonist of this book is drawn in wincingly bizarre and awkward stereotypical form, and you can practically sense the author counting out the beats before the next affirmation of non-white skin color in the narrative.

Remember, the greater good is a subjective business, yo.

Had I not been reading this novel for a Sharke assignment, I would have dumped it right there. There are some writers who can pull that off, but Tricia Sullivan is not one of them.

The Power by Naomi Alderman

Do we need more books that make women look bad?

A few months back, my oh, so clever Kindle recommended a self-published book written by some guy. It was a dystopia where women ruled the world and oppressed men… And it was all based on real life potential events, like women being on the Supreme Court, and Hillary Clinton being president. At the time, I thought, this MRA nut thinks he’s so clever, but sci-fi has always done dangerous, sexy dystopias ruled by women. Didn’t Burroughs invent this?

Now, we have Naomi Alderman adding electricity to the gender reversal storm with The Power, a near future story where young girls experience a quickening of electrical power across their collarbones, giving them the power to zap people to injury and/or death. And they can stimulate these powers in grown women. Suddenly, men and boys find themselves on the receiving end of pain, puniness, and patronizing pats on the head. The tables will turn, Alderman warns us, and men will finally see what we’ve all been complaining about.

It’s an intoxicating mix of empowerment, action, heroism and anti-heroism, and even I experienced a few “Yes! Get ‘em!” adrenaline rushes… but I would always wake up the next morning, after contemplating the plot so far, and feel a little manipulated and smoke-screened. For such a global shock, the story is relatively contained, limited to a Western perspective (or what a Western perspective would think is a global perspective), and, well, juvenile.

Its limited nature is a disappointment, but I get Alderman’s reasoning, as any deeper depiction would be sprawling (and probably not commercially palatable). What I find most disappointing, is that I’m having flashbacks to the same problems I had with the final third of The Destructives. It’s superficial and action-y, at the expense of any real foundation in philosophy or character development. (And by ‘character development,’ I don’t mean the characters must change or grow, but an authorial effort to chip away at the layers of artifice to reveal what the character subconsciously wants to hide.) Instead, like the women in The Destructives, we learn that the moment female character obtains any sense of “power,” she turns into a corrupt, opportunistic badass. This narrative has been done a thousand times before, and it’s not empowering. In fact, it’s a narrative embraced by Trumpers and MRA members, who might read this and enjoy this, but will see only the surface actions of embittered, vengeful women, and not Alderman’s larger critique of oppressive power.

I welcome any comments that explain to me that I’m missing a deeper point, but we must also consider how most readers will interpret this story. While I understand that Alderman is playing with a table-turning allegory and her ultimate intention is to illustrate that “power corrupts absolutely,” this borders dangerously close to undermining current efforts against the existing (and currently resurging) patriarchy. While I get the intoxicating lure of this book, and while I welcome depictions of complex, flawed women characters, The Power takes the power of extrapolation and turns it into generalization—promoting generalizations that have already persisted for centuries.

In terms of the writing, I remember pops of phrases that struck me as contemplative gems, but as I flip through the pages, I can no longer find them. Instead, what I see is action sequences surrounded by simple plot development, thin relationships, and a great deal of Western conniving and non-Western violence and destruction. Of course it’s being adapted for TV.

Tags:Megan AM, Naomi Alderman, Occupy Me, The Power, Tricia Sullivan
Share this article: