The Enjoyables: Arrival of Missives vs. Closed and Common Orbit

When I was eighteen or nineteen, my mother handed me the latest reading sensation, Harry Potter and the Sorcerer’s Stone, saying, “It’s not very well-written, but it’s cute and enjoyable.” I didn’t know what she meant by “not well-written,” but, from the first few chapters, it appeared to be a simple story, a “special one who does the right things” kind of story, and anyway, it was about a little boy, when, at the time, I mainly wanted to read about grownups, especially women. I didn’t get very far.

Again: I didn’t understand what she meant by “not very well-written,” and it would be a long time before I was ever able to see what other reviewers see when they make that distinction. At the time, any book that made me picture things by putting words together seemed like good writing to me, and Harry Potter did that just fine. It just wasn’t for me.

Going further back, when I was about thirteen or fourteen, I had just seen The Good Son, that movie about an evil kid, starring Macauley Culkin and Elijah Wood. Soon after I saw it, I was at Barnes & Noble and saw the novelization of the same movie sitting prominently on an endcap. Like any casual, unobsessive reader with a limited, passively-acquired knowledge of books, I went straight to what looked familiar. I bought the, er… novel.

So I read it. It was alright. Even though it was exactly like the movie, with the plot written into paragraph form, reading the book was a lesser experience. Obviously, the movie has the advantage of visuals, music, and good-looking people, so, for a long time, I assumed TV and movies offer a richer experience than books. My reading habits over the years—being drawn to genre books I’d heard of or those that jumped out at me from the most visible shelves—reinforced this belief. I simply got more out of things I could see and hear, rather than books that described things I should be able to see and hear.

Cut to now, after four or five years of intensive sci-fi TV-watching followed by four years of intensive sci-fi book blogging: It’s still difficult to articulate, but I now can identify what my mom meant by “not very well-written,” as well as the difference between what is intended to be a novel and what feels more like a novelization. Perhaps comparison is the best way to demonstrate this…

A Closed and Common Orbit by Becky Chambers: A Novelization 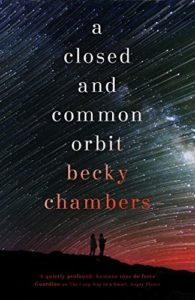 It’s no secret that The Wayfarers series is written by someone whose writing is heavily influenced by the two-dimensional, wrap-it-all-up-before-the-credits, don’t-scare-off-the-advertisers format of television, so it’s no surprise to me that this book reads like a novelization of a TV/movie that has already been made. (No, I’m not talking about Firefly. This series is nothing like Firefly.) Fans and reviewers have been hooked by the low-risk palling around of characters, the exotic alien foods, and the explainy, back-and-forth dialogue that attempts to teach open-mindedness. It is Doctor Who without the danger and squirm; Farscape without the oppressive political foes, Friends without the humor and occasional cringe.

This is fine. Perfectly fine. But to raise it above actual novels—novels that don’t catalog food and furniture placement, but invoke a sense of place and atmosphere; novels that don’t explain the way characters feel or why they react a certain way, but allow readers to draw their own conclusions about human nature; novels that allow characters to breathe, rather than serve as a two-dimensional function of preaching to the choir—is irrational.

A Closed and Common Orbit is a blunt and watered-down sociopolitical rendering of our world, as seen through the eyes of an upper-middle class, techno-positive American white woman. It is not a book of the future; it is a book that thinks eating grasshopper burgers is novel and interesting. It is a book that thinks differences among humanity can be conveyed via alien depictions, and can be waved away over a warm mug of mek. It is liberalism with a mallet, and it gives the reader nothing to do. It expects passivity, and rewards that passivity with everyone getting along at the cost of nothing.

This is a celebration of mediocre writing. It is a celebration of mediocre thinking. This is a book about an AI software learning what it means to be human, but acts as if it’s never been connected to the internet before. This is book about a former ship’s monitoring system that can’t anticipate that a nanobot tattoo might be incompatible with its own software. It is a book that leans on short, five word sentences and then repeats them with “really” for added emphasis. If readers take pleasure in a book this simplistic, flinching, juvenile, and mild, that is fine, but to position this book above others is disingenuous. It is an affront to the other eighty-five writers on the Clarke submissions list—some of whom also have written inane, childish stuff yet have been ignored, and some of whom have poured their blood and their brains into real novels stuffed with authentic, original thoughts, and have also been ignored.

But I can point this out and it will only matter to readers who aren’t already fans of this book, because even fans of the book recognize its limitations; they shrug and say it’s fun and they can relate, but they can say little else. It is not fun to me. If I can get the same thing out of it by watching it in two hours, then reading it is a waste of time. A novel should contain more depth than visuals, soundtracks, and pretty people can convey; this is a book that takes me nowhere.

A couple of years ago, Ursula Le Guin called out for more utopian literature, but even though everyone gets along in the end, I don’t think this is what she meant. Le Guin’s utopias are complex, imperfect, and uncomfortable. When I think of other utopias I’ve read, they don’t answer all the questions, and they don’t promote waving away conflict in order to maintain emotional equilibrium. They demonstrate a pliability with language, an ambiguity in morality, an uncertainty in their conclusions, a cloudiness in character behavior. The characters in ACACO are paper cutouts in comparison; their shapes are certain from the start, and any lines not hard-drawn are exhaustively delineated through explanatory paragraphs. Nothing is left to intuition or chance, not because Chambers doesn’t trust her readers to work for it, but because she is not aiming for the depths a novel can hold.

The Arrival of Missives by Aliya Whiteley: A Novel that’s Novella-ing

The Arrival of Missives hits that sweet spot of enjoyable, enticing, page-turning SF and thought-provoking concepts that radiate outward. In Whiteley’s last big-hit novella, the allegorical and strange The Beauty, Whiteley employs big, heaving metaphors to interrogate social concepts of beauty and romantic submission. With its staccato rhythms and powerful punches, The Beauty stands as one of the most stylistic and underrated works in recent SF. With such a signature style, many readers were braced for a follow up that might continue that pattern, perhaps to the detriment of Whiteley’s creativity, but The Arrival of Missives delivers something new and fresh, with richer rewards, and even more demonstrative of Whiteley’s prowess as a writer.

Differing from The Beauty’s stylistic punchiness, The Arrival of Missives takes on a more traditional style of prose, and more traditional narrative form. American readers might find hints of Anne of Green Gables. A precocious teen on the verge of womanhood pines after her teacher, an injured WWI vet, to the consternation of her childhood boyfriend, while the entire village has already decided her fate in marriage. She applies to Taunton College, defies the boy’s advances, and spies upon her beloved teacher, only to learn that his body is half-infused with a silvery rock that sends him visions about a spoiled, devastating future for humankind.

This is where the traditional taboo romance story is subverted, and Shirley-the-lovelorn-precocious-girl becomes Shirley-the-realistic-superhero, at first allowing her teacher to manipulate her into a soiled reputation that ensures her marriage to the boy, only to later disobey his commands, jilt her lover, offend her village and church, and pursue her teacher’s trail of violence and destruction as he seeks to halt a vision which she believes is a record of another planetary history. It’s a tale about struggle, critical thinking, and independence, the total opposite to the flinching, passive placating of A Closed and Common Orbit. Less than half the length of that celebrated Clarke nominee, The Arrival of Missives is far more intriguing, beguiling, thought-provoking, and better written, with more complete characterization. Given how pleasurable and mesmerizing it is, the absence of Arrival of Missives from the Clarke list is surprising and obvious, causing one to wonder if its novella-length caused an automatic disqualification among some of the jurors. Its absence from the Clarke shortlist is unjust when juxtaposed with the puerile A Closed and Common Orbit.

I see now they meant that I was bookish, and suited to becoming a learned woman. A learned woman is very different from a wise man… Keats did not warn me, and neither did Dickens. I did not find myself within their writings.

ACACO: She still felt weird. The kit was still wrong. But she did feel better.

AoM: It is as if, I think as I walk slowly home, a light has been switched on inside of me. It is a light that only men can see, and it attracts them, draws them close. It makes them think that I will be receptive to their glances and comments.

AoM: …all my plans seem quite strange and miniature to me. It is as if they are pictures that I painted in a small back room, without much light, and now I have carried them into the full glare of sunshine I must admit my pictures are washed-out and weak against the full palette of reality.

ACACO: ‘Would you mind if I ask you some questions about… about all of this?’

‘Not at all. Is this your first Shimmerquick?’

[cut to pages and lengthy paragraphs of one character explaining things.]

AoM: How I hate myself when I cannot control my feelings in the same way I can control my thoughts.