The Gradual by Christopher Priest: a review by Nick Hubble 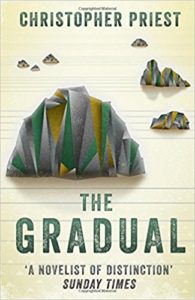 Just over a third of the way through Christopher Priest’s The Gradual, the modernist composer, Alessandro Sussken, is told by Generalissima Flauuran, the dictator of the totalitarian Glaund Republic, that she wants him to compose a full orchestral piece celebrating the tenth anniversary of the Republic but ‘we do not want irony, subversion, subtlety, cryptic statements, cross references, allusions, knowing asides, quotations, hidden meanings.’ Instead, the stipulated requirements include a minimum of four movements, three major instrumental soloists, four operatic soloists, a mixed chorus of over three hundred voices, a sequence of peasant celebration, a triumphal march and ‘cannon effects in the climax’. It’s difficult not to see this – especially in the context of shadow Clarke discussions concerning the relationship between SF and the ambiguity of the modern condition – as a commentary on the ironies of being a writer torn between desiring the possibilities that the genre opens up for interrogating the limits of consensus reality while hating the conformist demand to meet certain expectations that it also embodies. It is as though Gollancz had said to Priest, ‘We’ll leave you alone to write your weird stories of alienation and separation, as long as you knock out a mass-market, three-act space opera with a world-weary hero, feisty heroine and cynical robot as the three main characters, and include alien sex, a heist sequence and a climactic space battle.’ Would Priest indignantly decline or take the money and run as Sussken does? The answer, based on the evidence of The Gradual, is not as obvious as one might think.

The intriguing thing is that even before this encounter, Sussken is already experiencing drastic challenges to his adherence to ‘ascetic, theoretical modernism, with its experimental clashes and pauses’ from an unexpected surge of romanticism: ‘I wanted to write sea shanties and children’s musicals and I wanted to celebrate the love affairs of famous people’. The implication is that one is not so radically different from the other. Early in the novel, when the first stages of Sussken’s career are being described, he receives a letter from a fan of his work telling him that he is being plagiarised by a rock musician called – wonderfully – And Ante. Much later, when Sussken eventually meets And Ante, they have a long conversation about how the inspiration for music comes from the islands of the Dream Archipelago, in which the novel is set. Ante suggests that the music is not directly a product of ‘the gradual’ – the variable gradient of time distillation which pervades the Archipelago – but ‘a reflection of our own imaginings’. This suggests the kind of feedback loop between narration and reality which has haunted pretty much all of Priest’s considerable oeuvre and his fictions concerning the Dream Archipelago in particular. On the one hand, ascetic, experimental narratives do really render existence pointless to the point of continual existential pain. At one point, Sussken’s consciousness of the effects of the gradual reaches the level of Beckettian horror: ‘It was difficult to understand rationally – it was impossible to comprehend emotionally. The gradual was a kind of endless, inexplicable madness’. On the other hand, romantic, popular stories generate meaning but only in a narrow range between triteness and tragedy and they always end in the long run in death. But maybe that is preferable to inextricable madness.

Indeed, the ending of the novel, with an unexpected coup in Glaund, concludes with Sussken’s confession that ‘The new Glaund would need a triumphal march – I would be happy to include cannon effects, folk dancing entr’acte and even a couple of sea shanties’. Immediately preceding this statement, however, he also declares his intention of walking down to the beach the following day and looking across at the nearest island. Therefore, we know that the ultimate cycle won’t end on that endorsement of the popular but will continue to oscillate through the stages of experiment, enchantment, despair and hope. When I reviewed The Gradual last year for Vector (although the issue is not yet published), I suggested that like its immediate predecessor The Adjacent, it differs from the other Archipelago fiction in its adoption of something like the four stage model of fantastika proposed by John Clute: wrongness, thinning, recognition, return. The wrongness of Glaund, the hollow experience of restlessly travelling through the islands, and the recognition gained by Sussken in finally confronting his plagiariser, And Ante, are all clearly demonstrated before the final return to a renewed Glaund. In this respect, the novel is arguably more conventional or, leastways, more recognisable as a conventional story than, say, the fragmented gazeteer-form of The Islanders or, even, The Adjacent, which hops between different alternate realities. It is this veneer of conventionality – in what is after all still a trademark Priest text of misdirection and ambiguity – that foregrounds more clearly the symbiotic relationship between genre conventions and literary experimentalism that characterises his work. Sussken recognises the extent to which he is a duplicitous copy of himself through meeting Ante but at the same time he recognises that the type of story he is in is not one of literary existential horror but rather one of generic ontological possibility. By abandoning his desire for the mastery of the modernist artist, and allowing himself to be led by the example of the enigmatic female adepts of the gradual into opening himself to the possibilities the universe permits of meaning being continuously constructed, he actually ends up unwittingly creating something of value in the world.