The Underground Railroad by Colson Whitehead: a review by Megan AM 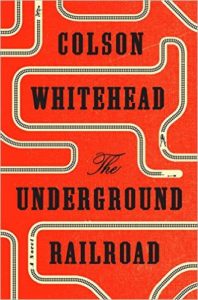 The most famous, most advertised of the six novels on the 2017 Clarke shortlist, yet this 2016 Pulitzer Prize and National Book Award winner, one of Oprah’s favorite things, and a 2017 Sharke pick has been perhaps the most divisive selection in this year’s battle for the best science fiction novel—not because it’s not good enough, not because it’s not interesting enough, but because some readers believe it is not science fictional enough.

It’s a shame, because discussion about this novel could focus on publishing in general: The Underground Railroad’s prominence in the media, the strategy behind its categorization as a mainstream novel, and its possibly misleading blurbs. We could talk about its potential place as literature for the future, whether it takes risks, or the general misunderstandings inherent in many (including my own) reviews… but instead, science fiction critics prefer to count the widgets.

So here we are.

There is legitimate concern that by labeling The Underground Railroad as science fiction, readers might dismiss the horrors presented in this geographically and chronologically distorted history, thus relegating it all to whimsical fiction. Yet the SFnal device is there for a reason, and Whitehead’s manipulations of time and space are critical to that purpose: as unnerving as The Handmaid’s Tale, as destabilizing as The Man in the High Castle, as cognitively demonstrative as Viriconium, and as psychologically resonant as The Dark Tower—all works that utilize alt universe devices to bring sociopolitical and literary concerns into powerful, stark relief. Whitehead’s use of this device is complex and brilliant, although I was unable to grasp just how complex and brilliant it is until this project, which has forced me into the tedious and meaningless position of having to argue for its place in science fiction.

But here we are.

The story opens with Cora, a woman held against her will, imprisoned as a slave on a plantation in Deep South, America. Her place and time is specifically identified as antebellum Georgia (and is recognizably antebellum Georgia, an important distinction as we make our way through the narrative). The horrors of slave life are conveyed in the most crisp, mundane, and blunted of ways, until Cora meets Caesar, who convinces her to run away with him, to find the mysterious underground railroad. They succeed in their quest—although ‘succeed’ is tenuous here: a fellow escapee dies, Cora becomes ‘Wanted’ for killing a white boy in self-defense, and they bring ruin and death to the only underground railroad connection in Georgia (which likely didn’t exist that far south. In our history, at least).

But Cora does escape, and takes a literal sub-surface train ride to freedom to… South Carolina—which, in our history, is arguably the most dangerous place for a free slave to wind up, due to its saturation of plantation life, white paranoia, and white resentment of total economic dependence on black labor for profit. (The cultural nuances of planation slavery make this arguable in academia, but that’s beside the point.) However, the South Carolina of Whitehead’s historical US is characterized as “progressive,” and feels and behaves more like 1950s Alabama, with an urban/suburban layout, automatic elevators, shop window dresses, linguistic affectations, and benevolent racism in the form of indoctrinating uplift and sinister medical experimentation on the black body. For readers even slightly familiar with the history of the antebellum South, the sense of cognitive dissonance in this section is bewildering: the narrative chugs along, masquerading as a straightforward historical rendering, yet nothing feels remotely historical in relation to the previous chapters. Cora has jumped ahead in time. Like any captivating runaway slave story, Cora is not where (and when) she’s supposed to be.

At this point, it becomes apparent that Cora is not traveling north on a pathway to freedom, despite what the narrative tells us. She is, instead, travelling through the evolution of white America’s racism.

Contradicting the US myth that racism has gradually, naturally disappeared over time, Whitehead’s mind-bendy techniques assert that Cora’s freedom is only an illusion. White progressivism is only an illusion. Once Cora gets a sense of the horrors underlying this “progressive” southern state, she takes the underground railroad again, this time landing in North Carolina, where black bodies hang from trees like strange fruit, and she must hide in an attic under the protection of an increasingly paranoid and resentful white progressive couple. From the attic, Cora has a bird’s eye view of the literal drama of white-on-black violence via racist minstrels that escalate to murder, with white paranoia of being outnumbered so thick she senses it from her perch—except, this paranoia, while recognizable anywhere in past and present US, is specifically, historically identified as a South Carolina thing—not a North Carolina thing (although we know it existed everywhere)—and the tactics that are used: lynchings (which bring to mind Indiana, Mississippi, East Texas, and, frankly, every where and any time), witch hunts (which bring to mind colonial New England), and commentary on “the colored question” (which brings to mind the Holocaust), are, once again, anachronistic and anatopistic. Again, Cora is not where and when she’s supposed to be, but, as Whitehead is teaching us through this device of surrealist history, time and place do not matter: Violence and racism permeate the whole of American existence. To assign racist violence to specific places in time, is to distance ourselves from the legacy of those violations. Whitehead won’t let us do that.

Cora finally escapes bloody and nightmarish North Carolina (which, in our historical reality, has often been characterized as the most “benevolent” and least trigger-happy state of the confederacy, dragging its feet a whole five months before seceding; unlike its brash, violently paranoid, and trailblazing sibling state, South Carolina, which sparked the secessionist movement), and takes the underground railroad, one more time, to Tennessee. Here, Cora finds respite amid what appears to be a healthy and secure community of free black intellectuals. As the most complex and ambiguous stop on Cora’s journey, where du Bois and Douglass-like characters populate the pages, a “Trail of Tears”-like subtext haunts the margins, and insecurity dominates relationships and politics of this pinhole community. It’s a community without an assigned place and time, a community we could easily find today, or fifty years ago, or immediately post-emancipation, where white dominance squeezes the comfort level for these communities, adding an acuteness to what can never be simple exercises in intellectual discourse. While it should be the safest of Cora’s stops, it is the pressure-cooker.

Whitehead could continue this journey even further into the racist progressive American psyche—there are, after all, plenty more progressive false narratives to overturn (why not plant Cora in a post-millennial publishing landscape where white bloggers patronizingly celebrate her novel without fully comprehending it?)—but he finally allows Cora her escape. The underground railroad is defunct in this weird Tennessee, so she burrows her way through the leftover tunnels, and eventually comes up in what appears to be Canada. Historically, we know Canada was not much more comfortable than the racist paternalism of the US North, but this is the Canada of Whitehead’s psychic geography, which is to say: it’s not America.

In many ways, The Underground Railroad’s distorted, childlike view of American history is similar to that of another recent literary crossover, Yuri Herrera’s Signs Preceding the End of the World, which provides a Through the Looking Glass view of a cartoonish, over-commercialized United States through the eyes of an unimpressed Mexican migrant. While Herrera’s novel conveys a sense of unreality about the US present—an unreality most Americans embrace—Whitehead’s novel conveys the very real sense of unreality about US history, but it goes further: using the surreal to illustrate the false narrative that perpetuates the teaching of the history of progressive race politics, and to highlight the ongoing insidious nature of US liberalism toward black skin.

It’s anachronistic and anatopistic nature is useful for Whitehead’s point: these things could happen any time, any where. He forces us to stop distancing ourselves from these events, to recognize the legacies of these abuses today. The relentlessness of bounty hunters, the double standards of “reasonable suspicion,” the patronizing, unstable support of white progressivism—it is all present, stark, and frightening.

Trains and railroads are a common feature in the literary landscape, often to symbolize an endless journey, or a barreling loss of control, neither of which works for this strange novel. The Underground Railroad, instead, takes a less common psychological approach to the railroad metaphor—a psychohistory approach, if you will. A common method in trauma recovery is to advise patients to revisit their traumas as though they are on a train: the landscape of memory to be scenery that just passes by, rather than memories to relive. This distancing technique allows for rational contemplation of events, rather than retraumatization, and often brings into relief truths that might have been obscured, or unnoticed by the emotional mind. Whitehead’s work with this technique does the opposite: Cora’s stint as a museum actor in “South Carolina” is one of the most surreally real details in the novel, but it also serves to magnify the untruths that have shaped popular understanding of history. The museum scene is such a strange interlude, almost a derailing of Cora’s already strange journey, but it serves to signal the underlying structure of the entire novel: Whitehead’s use of the ‘tableau effect’ is present throughout the entire novel; his shaping of American history into a diorama of strange and creepy events, which uncloaks those untruths as propaganda of the American melting pot.

While my initial feelings after my first read were positive, but more critical, I realize now I made the mistake many readers make on their first time reading what will inevitably become an important staple of literature: focusing on details of characterization, pacing, and enjoyment, when the work as a whole serves a greater function, with such trivial ‘mistakes’ becoming critical to the novel’s greater purpose. The more I inquire into the work, the more potential I see for scholarship and future appreciation, and it is unlikely that today’s readers, including myself, will fully capture the bounty The Underground Railroad has to offer.

(I also realize this essay will not convince anyone not already in my court that The Underground Railroad is science fiction, to which I say, you’re wrong, and I don’t care, and anyway: The Handmaid’s Tale, Perdido Street Station, The Separation, Iron Council, and Station Eleven. And this year’s Clarke jury and the Locus list seems to disagree, not that I would care, but anyway, you lost, nyah nyah nyah-nyah boo boo.)