Q&A with Dr. Una McCormack on her new novel The Star of the Sea 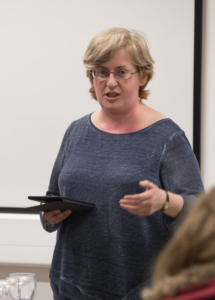 Una McCormack teaches writing at undergraduate and graduate level. Her background is in sociology, and before joining Anglia Ruskin University she taught at Judge Business School, Cambridge, and Cambridge University Engineering Department.

Una is also the author of seven science fiction novels, and numerous short stories and audio dramas in that genre. She is also a prolific fanfiction writer, setting up and organising a number of online writing groups and resources for fanfiction writers. Her short story “Taking Flight” (Crises and Conflicts, NewCon Press) was recently short-listed for the British Science Fiction Association award for short fiction.

MA Publishing student Lindsey Roberts took the opportunity to catch up with her about science fiction, the writing life, and her new novel Weird Space: Star of the Sea out from Abaddon Books…

In some ways it was quite similar, in that I was writing in an already-established universe, and had to make sure that I didn’t overwrite any of that. In other ways it was quite different – I usually write novels based on TV shows, so you’re often using characters or settings that people can visualise quite easily. I couldn’t rely on this in the case of the Weird Space books, which pushed my descriptive skills more than usual.

I’ve known Eric for years, and we get along brilliantly. I couldn’t have asked for a better co-author. Whenever I came up with an idea which pushed the universe on from how he’d imagined it, he would say, “I hadn’t thought of it that way – but let’s give it a go!” I can’t think of a more generous person to work with. 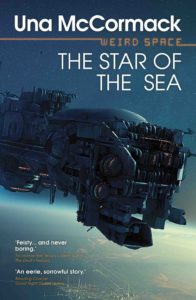 Weird Space: The Star of the Sea, published by Abaddon Books

By that point I felt confident enough – and that I had Eric’s blessing – to do what I wanted in the universe. So I really pushed my themes of parenting, interdependence, and so on, and didn’t hold back when it came to inventing things like new worlds, different aspects of the Weird and so on.

It would have been a very different book. I consciously set out to explore pregnancy and motherhood. The imagery in both books is intentionally soaked in Marian imagery. All of this was conscious. One thing that wouldn’t have changed is that I still would have written as many female characters as possible.

I’m not sure I’ve yet made a complete career out of writing – I still have a day job, although of course I’m teaching writing and talking a great deal about writing in the course of that day job. I think it was as early as when I got a contract for my first Star Trek short story: I sat down to start writing that morning thinking, “Wow. Now you’re doing this for real!” The trick is to keep it feeling fun and not like work.

I only write in the morning – I don’t have the brain capacity or time to write in the evenings any more, unless I’m very hard pressed for a deadline! I always leave the house and work somewhere else, such as a library or coffee shop. I usually warm myself up by answering a few emails, and then start writing about 10am. I write till 12.30, by which time I’ve usually got about 1500 words, and I’m also usually starving! I write in quite a linear fashion, and usually end a session by throwing down notes for what I want to do in the next writing session. You just have to keep plugging away!

I’ve often thought I might like to write historical fiction, but then I think about all the research I’d have to do. The nice thing about writing speculative fiction is that you can bend events to suit your story, and you can mix in whichever other genre you’d like – family saga, police procedural, crime thriller – and there’s nothing to stop you being as literary in your style as you want.

I’m going to cheat and pick two: one dead and one alive. I would of course love to meet JRR Tolkien, whose writing has played such an important part in my life, and just sit and talk about Middle-earth for as long as he was willing. The other author I would love to meet is Ursula Le Guin, although I think I would be tongue-tied meeting her.

Comet in Moominland by Tove Jansson. I still love her books, and they’re just as rewarding to read as an adult. My little girl already knows many of the characters from board books and the recent film, and I’m looking forward to reading the stories with her when she’s slightly older.

After completing a Film and Writing degree at Anglia Ruskin, Lindsey Roberts ventured out into the real world, realised that every job she wanted was in the publishing industry and a year later, came back to do a Publishing Masters here at ARU. Her desire to work in publishing stemmed from running a reviewing blog and getting a small glimpse into that world through contact with various publishers. Now she wants to be part of that world!

Lindsey has always had an interest in science-fiction and fantasy, but it cemented into a passion in her early teens. She was introduced to the Inheritance Cycle by Christopher Paolini and that was it, she was gone. Those books still remain a favourite now because of how much they inspired her. They made her fall in love with a genre, but also made her realise the sort of lands and adventures she wanted to explore in my own writing.

Science-fiction came a little later (although she’s been a Star Wars fan since being too young to understand and her dad explaining the guys in white were the bad guys!). It took her a while to find science-fiction books that she really enjoyed. Now she’s more than happy to jump into a spaceship and go for an explore.

While fantasy will always be her go-to genre, science-fiction comes pretty close behind these days!