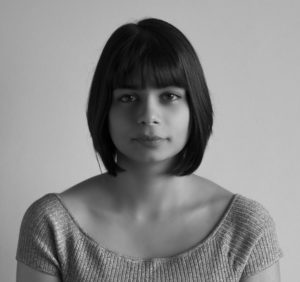 “Drawing on the concepts of ‘signifier’ and ‘signified’ in linguistic theory, this session will close read Vajra Chandrasekera’s Heron of Earth to see how word and meaning bifurcate to create different effects in the reader’s mind. Together, participants will explore the possibilities of this bifurcation for the worlds they create and in terms of reader empathy.”

Tashan Mehta is a novelist based in Mumbai. She graduated from the universities of Warwick and Cambridge, where she first developed her interests in form and the fantastical. In 2015, she was selected for the Sangam House International Writers’ Residency. Her debut novel, The Liar’s Weave, was published in the Indian subcontinent in 2017 and has been longlisted for the Prabha Khaitan Women’s Voice Award. Her short story, ‘Rulebook for Creating a Universe’, will be published in Magical Women, an Indian feminist speculative fiction anthology forthcoming by Hachette India in 2019. She is currently working on her second novel, a cross-genre work to be published by Juggernaut Books, and a third speculative fiction novel.